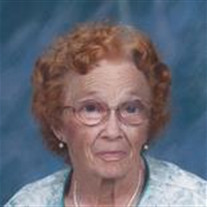 Bertina Doretta Schramm, the daughter of Carl and Alvina (Hulke) Marquardt, was born June 18, 1924 on the family farm near Cottonwood, Minnesota. She grew up on the family farm and received her formal education in the nearby country school. When she was a young woman, Bertina assisted mothers with new babies.

On December 8, 1946, Bertina married Immanuel “Barney” Schramm. They lived in Redwood Falls where, for the next 45 years, Bertina was a waitress at Pine Tree Dairy, the Jolly Mill Café, and Lois’ Café. She was a member of St. John Evangelical Lutheran Church in Redwood Falls where she sang in the church choir and was a Sunday school teacher for many years. Bertina also belonged to the Ladies’ Aid and was a member of the Adult Bible Study. In her spare time, Bertina enjoyed embroidery, canning and freezing food, making jams and jellies, and baking – her specialties were lemon and coconut cream pies and banana bread. She was an avid Twins fan.

She was preceded in death by her husband; children Phyllis Schramm and Bruce Schramm; brothers Carl, Lawrence, Harold, and Oscar Marquardt; and great-grandson Chuck Kral.

Blessed be her memory.
To order memorial trees or send flowers to the family in memory of Bertina Doretta Schramm, please visit our flower store.