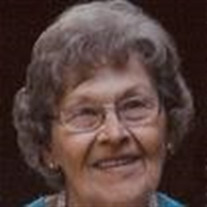 Bernice Rose, age 85, of Morgan died Friday, September 22, 2017 at Gil-Mor Manor Nursing Home in Morgan. Mass of Christian Burial will be held at 10:30 a.m. Wednesday, September 27, 2017 from St. Michael’s Catholic Church in Morgan with burial to follow in St. Michael’s Catholic Cemetery. Visitation will be held at the Nelson-Hillestad Funeral Home in Morgan on Tuesday, September 26, 2017 from 4 – 7 p.m. The visitation will continue on Wednesday for one hour prior to the time of mass at the church.

Bernice Sophie Weiss was born on July 4, 1932 in Leavenworth Township, Brown County, Minnesota to Clement and Philomena (Groebner) Weiss. She attended Mulligan Township, Iberia District 59 school near Comfrey and St. Raphael’s Catholic School in Springfield. On June 30, 1951 she was united in marriage to Robert Rose in St Paul’s Catholic Church in Comfrey. They spent their early years farming near Springfield and moved to a farm south of Morgan in 1956. In 1985 they moved into Morgan where she has lived since. Bernice was a farm wife and mother. She owned and operated Serendipity Ceramics out of her home for ten years. She also worked at Gil-Mor Manor, Control Data and Jackpot Junction. She was a member of St. Michael’s Catholic Church in Morgan and St. Anne’s Alter Society. She took great pride in refurbishing her homes, She was very artistic and enjoyed drawing and painting.


She is survived by her children; Kathy Flock & George of Frazee, MN, Sue Schmidt & Leroy of Baxter, MN, Cindy Kopischke & Doug of Morgan, MN, and Charlie Rose of Prior Lake, MN. Also surviving are her 10 grandchildren, 11 great grandchildren, and her sister Mary Jane Windschitl of Springfield, MN. She was preceded in death by her parents, her husband Robert, an infant son Robert, an infant daughter Mary, two sisters; Delores Ebnet and Angie Steffl and her brother Clarence Weiss.


Arrangements are with Nelson-Hillestad Funeral and Cremation Service of Morgan. E-mail condolences may be sent via www.nelson-hillestad.com .
To order memorial trees or send flowers to the family in memory of Bernice Rose, please visit our flower store.