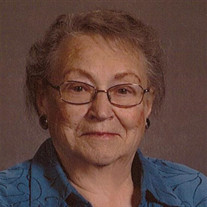 Bernice Goblirsch, age 88, of Morgan died Wednesday, September 20, 2017 at the Gil Mor Manor Nursing Home in Morgan. Mass of Christian Burial will be held at 10:30 a.m. Tuesday, September 26, 2017 from St. Michael’s Catholic Church in Morgan with burial to follow in the St. Michael’s Catholic Cemetery. Visitation will be held at the Nelson-Hillestad Funeral Home in Morgan on Monday, September 25, 2017 from 4 – 7 p.m. with a Parish Prayer Service at 4 p.m. The visitation will continue on Tuesday for one hour prior to the time of mass at the church.

Bernice A. Juenemann was born on December 7, 1928, the daughter of John and Agatha (Hillesheim) Juenemann on the family farm in Willow Lake Township, Redwood County. She attended country school and later graduated from Wabasso High School in 1946. Bernice earned her teaching certificate by attending the Lamberton Teacher Training from 1946 until 1947. She continued to attend classes in Mankato during the summers to further her teaching education. Bernice taught school in Stately Township, Brown County from September of 1947 until 1949, then at District 67 Country School from 1949 until 1952 and in the Redwood Falls Lincoln School from 1952 until 1955. She loved education and enjoyed teaching all the children over the years. On June 21, 1955 she married Lawrence Frank Goblirsch at St. Joseph’s Catholic Church in Clements. They lived and farmed on their farm in Sherman Township until retiring from the farm operation in 1988. In 1997 they fully retired from farm work and they moved into Morgan. She was married to Lawrence for over 46 years before his death on May 23, 2002. Bernice was an active member of the St. Michael’s Catholic Church and served as the Senior Dining Treasurer for many years in Morgan. She loved flowers, enjoyed her vegetable garden and cherished the time she was able to spend with her grandchildren and great grandchildren.

In loving memory.
To order memorial trees or send flowers to the family in memory of Bernice Goblirsch, please visit our flower store.