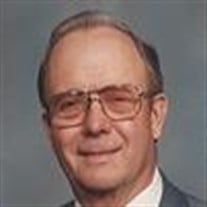 Bernard Simonsen, 92, of Morgan and formerly of Fairfax died Wednesday, April 2, 2014 at Seasons in Redwood Falls. Mass of Christian Burial will be held at 10:30 a.m. on Monday, April 7, 2014 from St. Andrew’s Catholic Church in Fairfax. Burial, with military honors, will follow in the church cemetery. Following the burial, a reception will be held at Squirrels Restaurant in Fairfax. Visitation will be held Sunday, April 6, 2014, from 4 until 7 p.m., with Rosary and Prayer Service at 3:30 p.m., all at Nelson-Martin Funeral Home in Redwood Falls. Visitation will continue on Monday from 9 to 10 a.m. at the church prior to Mass.

Bernard Lowell Simonsen, the son of Lars Peter and Rose Mary (Matter) Simonsen, was born September 10, 1921 in Sleepy Eye, Minnesota. He was raised on the family farm in Eden Township, Brown County and received his elementary education in rural district school. Bernard graduated from Sleepy Eye High School in 1939. Following graduation, he continued to work on the home farm until 1942 when he entered the Army Air Corp Aviation Cadet Program. He served in the Air Corp until his honorable discharge in 1946.

On July 16, 1945, Bernard married Mary Cecelia Clark in Roswell, New Mexico. Following his discharge from the service, they settled on their farm northwest of Sleepy Eye. They later relocated to a farm in Bandon Township, Renville County where they farmed. Mary preceded Bernard in death in 1984; in 1985 he retired to Fairfax. On August 5, 2000, Bernard married Ruth (Scharfencamp) Green and they made their home in Morgan until moving to Garnette Gardens in Redwood Falls this March.

He is survived by his wife Ruth of Redwood Falls and formerly of Morgan; children Cecelia Shipp of Laramie, Wyoming, Delores (Bob) Hoffman of Harrison, Idaho, Paul (Jan) Simonsen of Fairfax, Gerald (Patti) Simonsen of San Diego, California, and Tom (Judy) Simonsen of North Mankato; step-children Tom (JoAnn) Green of Morgan, Jill (Dick) Pistulka of Burnsville, Laure Green of Richfield, Kris Green of Eagle River, Alaska, and Kathy (Mark) Thompson of Burnsville; 11 grandchildren; 18 great-grandchildren; 17 step-grandchildren; 22 step-great-grandchildren; and a brother Clarence Simonsen of Marshall.
Bernard was preceded in death by his parents; his first wife Mary; his sisters Laura, at birth, and Alice, at age 16; and his brothers Donald and Maurice.

Blessed be his memory.
To order memorial trees or send flowers to the family in memory of Bernard Lowell Simonsen, please visit our flower store.