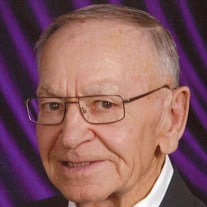 Bernie Frank, 82, of Redwood Falls joined his Savior on Friday, July 1, 2016 at his Green Lake cabin in Spicer, MN, surrounded by his children, grandchildren, great grandchildren and close friends. Mass of Christian Burial will be held at 11 a.m. on Thursday, July 7, 2016 from St. Catherine’s Catholic Church in Redwood Falls with burial of cremains to follow in Calvary Cemetery, Morton. Visitation will be held on Wednesday, July 6, 2016 from 6 until 9 p.m. with a prayer service at 8 p.m., all at St Catherine’s Catholic Church in Redwood Falls. Visitation will continue on Thursday at the church for one hour prior to services.
The family requests memorials be directed to Service Enterprises, Inc., P.O. Box 248, Redwood Falls, MN 56283.
Arrangements are with Nelson-Hillestad Funeral and Cremation Service of Redwood Falls. E-mail condolences may be sent via www.nelson-hillestad.com
Bernie Frank, son of Henry and Josephine (Kojetin) Frank, was born on June 10, 1934 in Olivia. He graduated from Morton High School, where he was active in baseball. Bernie’s dad kept him home his senior year to help farm. He went on to graduate the following year with the class behind him. He always enjoyed being a member of both classes.
Bernie married Joan Keaveny in 1956. They lived the majority of their marriage out on their farm near Bechyn. He and Joan, raised eight children on the farm, making sure to include all of them in the activities of the farm operation.
Bernie originally farmed with his brother, Henry, and then later with his sons & grandsons. Initially, he raised cattle along with grain farming. He sold the cattle in the late 1960’s and just raised grain crops for the rest of his farming. He took great pride in the crops he raised and enjoyed driving around to survey their progress, often times, taking the whole family in the car to view the corn and soybeans. He was a member of the Federal Land Bank Board in the 1980’s. He was also a school board member at the Morton Public School.
Like a typical member of the Frank family, Bernie enjoyed playing cards (and most were good at it). Up until his death, he was very active in bridge clubs, poker, cribbage and euchre. He would always tell us, his mother, Josephine, said it kept the mind sharp. He also enjoyed many fishing trips with friends and family, some with an annual tradition of over 40 years. Bernie’s favorite times were spent with his family at Green Lake, MN. Playing cards, fishing, yard games and grilling…all were done with friends and family at his side.
His daughter, Maria, was the most precious part of his life. He enjoyed weekly dinners and loved spending time with her. He was so happy to see her living a full, enriched life with her roommates and staff.
Bernie is survived by his children Paul (Deb) Frank of Redwood Falls, Joe (friend Lori) Frank of Prior Lake, Mark (Cindy) Frank of Benson, Beth (Steve) Riebel of Ramsey, Shawn Frank of Battle Lake, Maria Frank of Redwood Falls, and Andrew (Brandee) Frank of Shakopee; grandchildren, Nicholas Frank, Joshua Frank, Shelby Helgeson, Brittany Frank, Courtney Rittenour, Anthony Frank, Anna Riebel, Maxwell Riebel, Peyton Riebel, Sophia Riebel, Taylor Frank, Kelsey Frank, Carter Frank, Josie Frank, Gracie Frank, Hattie Frank, eight great-grandchildren and special friend Marilyn Scott.
He was preceded in death by his wife, Joan, daughter Sandy Frank, great grandchild Beckett Helgeson his brothers Milo Frank, Bill Frank, Wenzel Frank and sister, Angie Elbert.


Blessed be his memory.
To order memorial trees or send flowers to the family in memory of Bernard "Bernie" Frank, please visit our flower store.