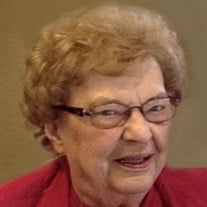 She was born in Sleepy Eye, Minnesota on December 11, 1929 to immigrant parents Frank and Anna (Wawra) Kirsh. She was raised on the family farm near Milroy, Minnesota and graduated high school there in 1947.

Soon after high school she moved to Redwood Falls, MN and began working for Northwestern Bell Telephone Company. There she met her future husband Cy, and they were married on October 20, 1951. Bernie liked to stay busy and after retiring from the phone company, where she worked for 30 years, she worked for the Farm Credit Services, Jackpot Junction, and REM.

Bernie had a special gift for numbers and could recite most any telephone number in the local area. She enjoyed playing in many bridge and card groups, going to the Redwood Senior Center, knitting and cross stitch. She volunteered as an election judge, and spent many late nights counting ballots. Bernie also volunteered with Meals On Wheels and at the Redwood Falls Food Shelf, where she also served on the board. She was an active and faithful member of St. Catherine's Catholic Church.

In 2019 she moved from her home at Garnette Gardens to Prince of Peace Retirement Community in Sioux Falls, South Dakota.

She was preceded in death by her husband Cy; brothers Paul Kirsh and his wife Fern, twin brother Bernard Kirsh, and sister Lydia Flett and her husband George; brothers-in-law Carroll Ahlstrand, Glenn Keltgen, Roger Keltgen and his wife Minnie.

Bernadine's family extends their deepest gratitude to the kind and caring staff at Prince of Peace.

In lieu of flowers, donations in her memory may be made to Redwood Area Food Shelf or the Redwood Area Animal Shelter and can be sent to daughter, Barb and Tom Parliman at 1209 S. Lyndale, Sioux Falls, S.D. 57105 or daughter, Paula and Mark Bonine at 18908 100th Ave. North, Maple Grove, MN 55311

Blessed be her memory.
To order memorial trees or send flowers to the family in memory of Bernadine Mary Keltgen, please visit our flower store.