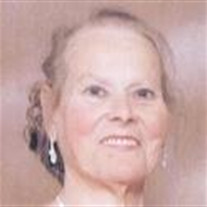 Arvella Rae Zachow, the daughter of Weldon and Theresa (Poe) Wiese, was born July 7, 1945 in St. Paul. She grew up on Marshall Street in St. Paul and received her high school education from Marshall High School, graduating in 1963. Later, Arvella attended Granite Falls Technical College and earned an associate degree in business. She was employed for many years at Certain-teed in Shakopee as an inspector. Arvella later worked at Zytec in Redwood Falls, the Wabasso Healthcare Center, and the Corner Corral in Sanborn. She was the bookkeeper for Zachow Trucking since 1999.

On October 16, 1999, Arvella married Charlie Zachow in Trinity Lutheran Church, Willow Lake Township, and they made their home in rural Wabasso. Arvella was a member of Sanborn United Methodist Church where she was very involved in church activities, including serving as a member of the Pastor/Parish Relations Committee. In her spare time, Arvella enjoyed painting, sewing and jewelry making.

Blessed be her memory.
To order memorial trees or send flowers to the family in memory of Arvella Zachow, please visit our flower store.