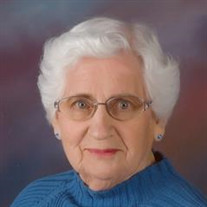 Ardyce Young, the daughter of Oscar and Vera (Willroth) Naig, was born November 23, 1924 in Madison, Minnesota. She spent her earliest years in Gary, South Dakota and then moved with her family to Beaver Falls, Minnesota when she was eight years old. Ardyce received her elementary education in Gary and in country school in Beaver Falls. She enrolled in Redwood Falls Public School her freshman year, graduating from Redwood Falls High School, at age 16, in 1941. Following high school, Ardyce worked for the C.O. Halvorson family and occasionally was called upon by Superintendent Halvorson to serve as a substitute teacher.

On June 22, 1944, Ardyce and Charles “Chuck” Young eloped and were married in Minneapolis. After Chuck received his Navy “wings,” the couple lived in Miami, Florida for 10 months; when he deployed overseas, Ardyce returned to Redwood Falls where she worked for Knudson’s Jewelry. When Chuck returned from the service, the couple lived in Hector before moving to Beaver Falls in 1946. They moved their family to Redwood Falls in 1959. Ardyce was employed at Woolworths for a time, then Williams Studio where she worked until 1973. She then worked for Control Data/MPI/Zytec until she reached retirement age. At that time Ardyce began volunteering as a driver for WESCAP, continuing until she was 89 years old.

Blessed be her memory.
To order memorial trees or send flowers to the family in memory of Ardyce Young, please visit our flower store.