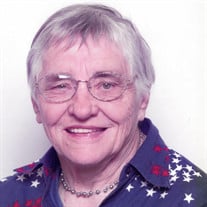 Ardis Marie Alexander was born February 11, 1933, in Springfield MN to Arthur and Elsie (Kettner) Boettger. She graduated from Springfield High School in 1950, attended Mankato Commercial College, and worked in Springfield at the Vogel-Mueller Agency prior to marriage.

In 1956 Ardis married Edmund E. Zamzow at St. Paul Lutheran Church in Springfield. They lived on the family farm in Morgan MN and raised four sons - Mark, Timothy, Joel, and Daniel. She was involved in many activities at St. John Lutheran Church in Morgan, including choir, ladies’ circle, and quilting. She was an avid supporter of Green Lake Bible Camp (Spicer, MN). For many years during the summer, she worked at the Del Monte sweet corn pack (Sleepy Eye, MN), often with her college-aged sons. She was a very hard and diligent worker in the house and in the fields of the family farm. She enjoyed gardening, flowers, and plants.

After Edmund died in 2000, Ardis married widowed farmer and long-time acquaintance Gordon D. Alexander in 2002 at St. John Lutheran Church in Morgan. They enjoyed many happy years together, traveling to Alaska, Costa Rica, Scotland, Zambia (two-week Christian Missions trip), and other places. They were active members of First Presbyterian Church in Redwood Falls MN. They lived in Vesta MN and were very active in community-area events; in 2016 she moved to Parkwood Apartments (Belview, MN), and then to the Parkview Nursing Home in Belview in 2019. Ardis enjoyed spending time with her step-children - Richard, Rita, and Robert Alexander - and their children and grandchildren.

She is survived by son Joel (Kristine) and their children MacKenzie and Hunter; son Daniel; daughter-in-law Lynn Furnstahl (Mark) and her daughters Emily and Elise; one nephew and three nieces. She is also survived by her step-children Rita, Robert (Sonya), Cherrie (Richard) and their 10 children and 7 grandchildren.

Blessed be her memory.
To order memorial trees or send flowers to the family in memory of Ardis Marie Alexander, please visit our flower store.