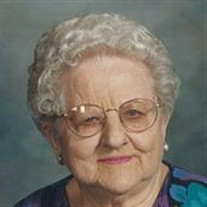 On June 25, 1940, Anna married Alois Altermatt at St. Mathias Catholic Church in Wanda and the couple resided in Wabasso. Anna began working as a dining room assistant at the Wabasso Nursing Home and was employed there for 17 years, from 1965 until her retirement in June 1982.

Anna was a member of St. Anne’s Catholic Church and the Council of Catholic Women. She resided in Wabasso until 2011, when she moved to Garnette Gardens in Redwood Falls. Anna returned to Wabasso in August 2014. She enjoyed doing word puzzles, playing Yahtzee and Bingo, and traveling.

Anna was preceded in death by her parents; her husband Alois on October 31, 1970; sisters Mary Regner and Amelia Gores; and brothers Joe and Anton Kahs.

Blessed be her memory.
To order memorial trees or send flowers to the family in memory of Anna Altermatt, please visit our flower store.