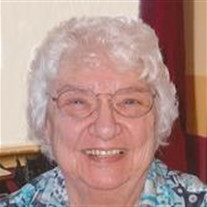 Ann Marie Polzin, the daughter of Andrew and Anna (Nader) Vogel, was born January 17, 1932 in Springfield. She grew up in the Springfield area and received her formal education in country school.

On July 16, 1958, Ann married Melvin Polzin in Springfield and they made their home in Evan. The family moved to Vesta in 1970. Ann and Melvin then moved to Estelline, South Dakota in 1980 and later retired in Belview in November 1999. Ann was a homemaker. She loved spending time with her family and enjoyed baking, crocheting, cooking, gardening and canning. Ann was a member of Grace Lutheran Church.

Ann was preceded in death by her grandson Jacob Allex; and brothers Joseph, Leo, Frank, and Robert Vogel.

Blessed be her memory.
To order memorial trees or send flowers to the family in memory of Ann Polzin, please visit our flower store.