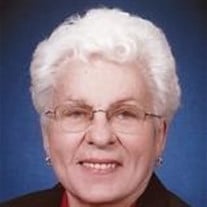 Angela Rose Kinney, the daughter of Adolph and Julia (Bartes) Serbus, was born October 17, 1928 in Henryville Township, Renville County, Minnesota. She grew up on the family farm near Bechyn and received her formal education in District 12 rural school.

On May 20, 1948, Angie married Edward “Ed” Kinney a St. Mary’s Catholic Church in Bechyn. Together they farmed in Birch Coolie Township, until their retirement to Redwood Falls in 1993. Angie was a member of the St. John’s Altar and Rosary Society in Morton for 45 years and later the CCW at St. Catherine’s in Redwood Falls. She also belonged to the Mission Sewing Club at St. Catherine’s. Angie loved to read and enjoyed scrapbooking, playing cards, crafting and painting. She also enjoyed gardening, baking, visiting the family and friends, and country western and polka music.

Angie is survived by her daughters Patricia (Jerry) Grapentine of Henderson, Dianne (Terry) Baker of Lake City, Florida, and Joyce (Dean) Merillat of Grand Portage; and many grandchildren and great-grandchildren. She was preceded in death by her husband Ed; son Richard; parents Adolph and Julia; and brothers Ben, Dave, Emil, Ernie, and George.

Blessed be her memory.
To order memorial trees or send flowers to the family in memory of Angela "Angie" Rose Kinney, please visit our flower store.