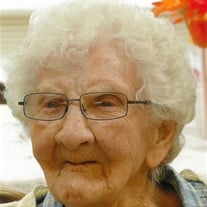 Alice Gertrude Frank, of Redwood Falls, passed away December 31, 2018 at Wood Dale Nursing Home in Redwood Falls. She was 105 years, 5 months, and 24 days old. Funeral Services will be held on Saturday, January 5, 2019 at 2:00 pm at the United Methodist Church in Redwood Falls. Visitation will be from 1:00 pm till time of services at the church. Burial will follow in the Redwood Falls Cemetery.

Alice was preceded in death by her parents and five brothers; two sisters and son-in-law Vern Day.

May she rest in peace.
To order memorial trees or send flowers to the family in memory of Alice G Frank, please visit our flower store.