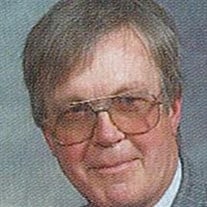 Alan Elmer Berg, the son of Elmer and Gretchen (Fuglem) Berg, was born May 26, 1945 in Echo. He grew upon a farm near Belview and received his formal education in Belview Public School. Al worked as a carpenter for Orvin Sander and then was a cabinetmaker at Welter’s Woodworks, and later for Joel Grunke.

On December 6, 1980, Al married Diane Pequin and they make their home in Redwood Falls.

He was a member of St. John Evangelical Lutheran Church where he served as an usher. Al loved to pitch horseshoes. He was involved in horseshoe league for 25 years and won dozens of trophies.

He was preceded in death by his parents and one nephew.

Blessed be his memory.
To order memorial trees or send flowers to the family in memory of Alan "Al" Berg, please visit our flower store.