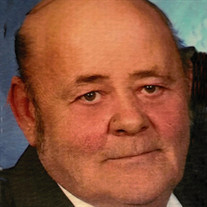 William “Bill” Peters, 72, of Redwood Falls died Thursday, August 9, 2018 at his home. Funeral services will be held at 11 a.m. on Wednesday, August 15, 2018 from the Cornerstone Christian Church in Redwood Falls with burial in the Redwood Falls Cemetery. Visitation will be held Wednesday, August 15, from 10:00 a.m. until time of service at the church. Arrangements are with Nelson-Hillestad Funeral and Cremation Service of Redwood Falls. E-mail condolences may be sent via www.nelson-hillestad.com. William A. Peters, the son of Frank and Alice (Jensen) Peters, was born August 24, 1946 in Redwood Falls, Minnesota. He lived south of Redwood Falls on the family farm. Bill received his elementary education in a country school, half a mile from where he lived up to second grade and then attended Redwood Falls School graduating in 1965. He spent 6 years in the National Guard. Bill farmed alongside his dad, starting his own custom farm business. Raising livestock was always the high light of his farming. On August 18, 1968 Bill married Kay (Okins) at the Presbyterian Church in Redwood Falls. They made their home in the country living half a mile from the main Peters farm, until 1990 then moved to the main farm site. To this marriage they had 3 children, William, Robert and Rebecca. In Bill’s school years he enjoyed wrestling and lettered for 3 years. In later years he enjoyed racing cars, after he retired from racing he enjoyed taking his wife and children to the races. Going to the rodeo’s in South Dakota was something the whole family enjoyed and camping at the rodeo grounds. Bill was a member of the Cornerstone Christian Church for 59 years he was baptized at 13 years old. Bill lived his life as a Christian and always tried to be fair in the business. A meal was never eaten at our home without praying. He is survived by wife, Kay of Redwood Falls, MN; sons Billy Peters of Redwood Falls, MN, Bob (Kelly) Peters, of Olivia, MN, and daughter Becky (Mike) Kleinhuizen of Redwood Falls, MN; Grandchildren; Abbie (fiancé Nathan Genung) Peters, Maddie Peters of Olivia, MN, Zak (fiancé Amber Palmer) Kleinhuizen of Wabasso, MN, and Isabella Kleinhuizen of Redwood Falls. William “Bill” was proceeded in death by his parents Frank and Alice Peters; granddaughter Cassandra Peters; brother in-law Larry Okins and a very good friend Larry Roush. Blessed be his memory.

The family of William "Bill" Peters created this Life Tributes page to make it easy to share your memories.

Send flowers to the Peters family.