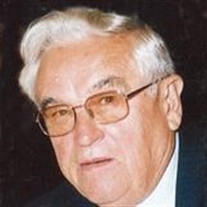 William “Bill” H. Munsell, 91, of Franklin died Tuesday, May 30, 2017 at Season’s hospice in Redwood Falls. Memorial Services will be held at 11 a.m. on Saturday, June 3, 2017 from St. Luke’s Lutheran Church in Franklin with burial to follow in Mount Hope Cemetery, rural Franklin. Visitation will be held Friday, from 5 until 7 p.m., and continue on Saturday, from 10 until 11 a.m., all at St. Luke’s Lutheran Church. The family prefers memorials be made to St. Luke’s Lutheran Church or Mount Hope Cemetery. Arrangements are with Nelson-Hillestad Funeral and Cremation Service of Redwood Falls. E-mail condolences may be sent via www.nelson-hillestad.com. William Henry Munsell, the son of Ray D. and Mary (Colwell) Munsell, was born March 9, 1926 on the family farm in Section 29 of Eden Township, Brown County. He spent his early years on the farm and began his formal education in the nearby country school. When Bill was 10 years old, the family moved into Franklin and he continued his education in Franklin Public School. On August 22, 1950, Bill married Donna Paulsen in Worthington and the couple lived in Franklin while Bill farmed. He was inducted into the United States Army in June 1951 and served as an engineer in Korea. Bill was honorably discharged in 1953 and, in 1954, he and Donna built their house on the farm. They retired and moved into Franklin in 1977. Bill was a cattleman and bonded livestock dealer. He was an independent businessman who focused on buying and selling cattle. Bill enjoyed meeting people and had a large circle of friends. He was a great story-teller who loved to laugh and have fun. Everyone around Franklin has a story to tell from, or about, Bill – and most can do a pretty good impersonation of him. Bill was a member of St. Luke’s Lutheran Church, a member of the Masonic Antiquity Lodge #91 in Redwood Falls, and served as president of the Mount Hope Cemetery. He is survived by his wife Donna of Franklin; children Linda (Rich) Cody of Nashville, Tennessee, Ray (Deb) Munsell of rural Franklin, Leslie Munsell (Burt Dubbin) of Miami Beach, Florida, Lisa (Pat) Denzer of Minneapolis, and Mary Alice (Laurent) Nicoletis of India. Also surviving are his grandchildren Robert and Stephanie Milner, Brandon Munsell, Logan and Isabella Denzer, and Claire and Jon Nicoletis; great-grandchildren William and Avery Milner, and Kataleya Munsell; and sister Mary Lou (Munsell) Mathias of Washburn, Missouri. Bill was preceded in death by his grandson Justin Jensen; and sisters Jean Kiecker and Dorothy Finley. Blessed be his memory.

The family of William "Bill" Munsell created this Life Tributes page to make it easy to share your memories.

Send flowers to the Munsell family.