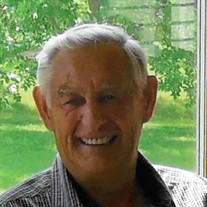 William &#8220;Bill&#8221; Frank, age 80, of North Redwood, passed away at his home on Friday, August 7, 2020. In honoring Bill&#8217;s wishes there will not be a public service. Family prefers memorials to Carris Health-Redwood Hospice Care... View Obituary & Service Information

The family of William 'Bill' Frank created this Life Tributes page to make it easy to share your memories.

Send flowers to the Frank family.