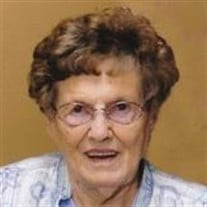 Minnie Flock, 95, of Morgan died Friday, March 25, 2011 at Gil-Mor Manor in Morgan. Mass of Christian Burial will be held at 10:30 a.m. on Monday, March 28, 2011 from St. Michael’s Catholic Church in Morgan with burial in the church cemetery. Visitation will be held Sunday, March 27, 2011 from 4 until 7 p.m., with a CCW Rosary at 4:30 p.m. and Parish Prayer service at 6:30 p.m., all at the Nelson-Martin Funeral Home in Morgan. Visitation will continue on Monday at the church for one hour prior to services. Arrangements are with Nelson-Martin Funeral Service of Morgan. E-mail condolences may be sent via www.nelsonmartinfuneralservice.com. Wilhelmina “Minnie” Mary Flock, the daughter of George and Wilhelmina (Schroepfer) Schroepfer, was born May 18, 1915 near Sleepy Eye in Albin Township, Brown County, Minnesota. She was raised in Albin Township and received her education in Albin Township country school. On May 13, 1944 Minnie married William “Bill” C. Flock at St. Mary’s Catholic Church in Sleepy Eye. The couple moved to Milwaukee, Wisconsin where Minnie worked in a defense plant. They returned to Minnesota in 1945 where they lived and farmed south of Morgan. In 1963 they moved into Morgan. Bill died in 1996 and Minnie moved into Gil-Mor Manor in August 2000. She had been a member of St. Michael’s Catholic Church since 1945 and was active in the Council of Catholic Women. Minnie’s faith was very important to her and she led by example. Minnie was a homemaker and considered her greatest accomplishment to be raising her nine children. Minnie enjoyed spending time with her children and grandchildren, cooking and baking. She always looked forward to the annual Flock summer vacation at the lake. Minnie is survived by her children Ann (Ron) Weber of Burnsville, George (Kathy) Flock of Frazee, Bill (Joyce) Flock of Ghent, John (Mary) Flock of Milaca, Cheryl (Tony) Rompa of Cologne, Virgil (Lori) Flock of Sauk Rapids, Paul (Nancy) Flock of Olympia, Washington, and Dolores (Tom) Pistulka of Sartell; 21 grandchildren; and 19 great-grandchildren. She was preceded in death by her parents; her husband Bill on March 14, 1996; her son Allan on March 12, 1977; and her siblings Mary Eckstein, Ervin (in infancy), Margaret Kainz, Adelinde Hoffmann, Veronica Hillesheim, Viola Ludewig, Emil, George, and Delores (in infancy). Blessed be her memory. The family extends a special thank you to all the staff at Gil-Mor Manor and Redwood County Hospice.

The family of Wilhelmina "Minnie" Mary Flock created this Life Tributes page to make it easy to share your memories.

Send flowers to the Flock family.