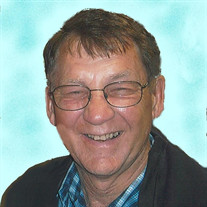 Wilfred Steffl, 69, of rural Clements died Thursday, May 26, 2011 at Seasons in Redwood Falls. Mass of Christian Burial will be held at 11 a.m. on Tuesday, May 31, 2011 from St. Michael’s Catholic Church in Morgan with Father Mark Mallak officiating. Burial will follow in the church cemetery. Visitation will be held Monday, May 30, 2011, from 4 until 8 p.m., with a prayer service at 7 p.m., all at St. Michael’s Catholic Church. Visitation will continue on Tuesday, from 10 until 11 a.m., at the church Arrangements are with Nelson-Martin Funeral Service of Morgan. E-mail condolences may be sent via www.nelsonmartinfuneralservice.com. Wilfred Andrew Steffl, the son of Leo and Rose (Eisenbarth) Steffl, was born August 31, 1941 in Three Lakes Township, Redwood County. He was raised on the family farm near Clements and received his education in Morgan, graduating from Morgan High School in 1959. On November 26, 1966, Wilfred married Carolyn Green at St. Michael’s Catholic Church in Morgan. Following their marriage, the couple settled on the farm near Clements where Wilfred farmed for 46 years until his retirement this past October. He was a member of St. Michael’s Catholic Church in Morgan where he belonged to the church choir and the Knights of Columbus. Wilfred enjoyed carpentry, building and farming. He truly enjoyed spending time with his family and friends and he dearly loved his grandkids. Wilfred is survived by his wife Carolyn of rural Clements; his children Jackie Griffin (Mike Rohrer) of Altus, Oklahoma, Jill (Mike) Phelps of Stillwater, Jason (Kelly) Steffl of Redwood Falls, Brent (Jamie) Steffl of Alexandria, and Eric (Lisa) Steffl of Clements; and 17 grandchildren. Also surviving are his brothers Bob (Patty) Steffl of Morgan, Herb (Ruth) Steffl of Alexandria, and Ed (Denise) Steffl of Morgan; and his sister Pat (Dave) Huschke of Midland, Michigan. He was preceded in death by his parents. Blessed be his memory.

Wilfred Steffl, 69, of rural Clements died Thursday, May 26, 2011 at Seasons in Redwood Falls. Mass of Christian Burial will be held at 11 a.m. on Tuesday, May 31, 2011 from St. Michael&#8217;s Catholic Church in Morgan with Father Mark Mallak... View Obituary & Service Information

The family of Wilfred Andrew Steffl created this Life Tributes page to make it easy to share your memories.

Send flowers to the Steffl family.