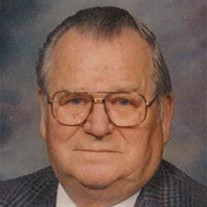 Walter J. Lowinske, 90, of Redwood Falls died Wednesday, January 4, 2017 at St. Therese Home in New Hope. Memorial services will be held at 11 a.m. on Friday, JANUARY 13, 2017 from Nelson-Hillestad Funeral Home in Redwood Falls with inurnment at a later date. Visitation will be held Friday, January 13, 2017, from 10 until 11 a.m., at the funeral home. Arrangements are with Nelson-Hillestad Funeral and Cremation Service of Redwood Falls. E-mail condolences may be sent via www.nelson-hillestad.com. Walter John Lowinske, the son of Paul and Freda (Macho) Lowinske, was born March 11, 1926 on the family farm in Brown County. He received his formal education in the nearby country school and Sleepy Eye Public High School. Walter enlisted in the United States Navy in February 1944 and, immediately following high school graduation, entered active service in June 1944. He served aboard the USS Porter until his honorable discharge in February 1946. On May 29, 1948, Walter married Beatrice Krienke in St. John’s Lutheran Church, Sleepy Eye. The couple made their home in Sleepy Eye for the next six years where Walter was employed as a carpenter. The family moved to Hutchinson in 1954 where Walter farmed and worked for 3M. In 1969, he transferred to the 3M plant in New Ulm and worked there until his retirement in 1979. Walter and Beatrice moved to their retirement home on Diamond Lake in the late 1970s. They relocated to Redwood Falls in 2005 and moved into Garnette Gardens in 2015. Walter was a member of St. John Evangelical Lutheran Church in Redwood Falls. He was an active member of the American Legion posts in Sleepy Eye and Hutchinson and was a member of their Drum and Bugle corps. Walter enjoyed hunting, fishing, and bird watching but, most of all, he enjoyed entertaining his family at the lake. He loved having all the kids come to the lake and camp in the yard. Walter is survived by his wife Beatrice of Redwood Falls; and children Joleen Schrepfer of Belview, Jay (Kay) Lowinske of Fridley, and Jim (Patti) Lowinske of Hutchinson. Also surviving are his grandchildren Era, Neal, Heather, Ryan, Tessa, Jeremy, Michael, Ben, Jamie, Misti, and Kelli; 22 great-grandchildren (and one on-the-way); and his sisters Verna Barnes of Hutchinson, and Mae Tischer of Alaska. He was preceded in death by his daughters Jacolyn Walter and Jan Lorentz; son Jeffrey Lowinske; and brother Lester Lowinske. Blessed be his memory.

The family of Walter Lowinske created this Life Tributes page to make it easy to share your memories.

Send flowers to the Lowinske family.