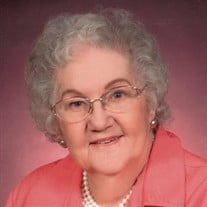 Virginia L. Nelson, age 100, of Redwood Falls died on Friday, October 2, 2020 at the Gil-Mor Manor Nursing Home in Morgan, Minnesota. Funeral services will be held at 10 a.m. on Thursday, October 8, 2020 from Nelson-Hillestad Funeral Home in Redwood Falls, Minnesota with burial to follow in the Redwood Falls Cemetery. Visitation will be held prior to the service from 9 until 10 a.m. on Thursday, October 8, 2020 at Nelson-Hillestad Funeral Home in Redwood Falls. Arrangements are with Nelson-Hillestad Funeral and Cremation Service of Redwood Falls. Condolences may be sent via www.nelson-hillestad.com. Virginia Loretta Nelson was born on September 6, 1920 to Alfred and Anna (Klabunde) Dugas in Clements, Minnesota. She grew up in Clements and graduated from Wabasso High School. On April 18, 1938, Virginia married Elmer Nelson in Sioux Falls, South Dakota. They made their home on a farm SE of Clements. Virginia enjoyed cooking, baking for family affairs, playing the organ and crewelwork. She also enjoyed writing beautifully ornate handwritten letters to family and friends. She was a member of Gloria Dei Lutheran Church of Redwood Falls and at one time a member of the American Legion Auxiliary in Clements. Virginia is survived by her children, Leon (Debby) Nelson of Bemidji, Minnesota and Douglas Nelson of Wabasso, Minnesota. Grandchildren-Christine (Randy) Januchowski of Hillsborough, North Carolina, DeeDee (Antonio) Roundtree of St. John, Florida, Briana (Levi) Smith of Moorhead, Minnesota, 3 Great Grandchildren and 1 Great-Great Grandchild. She is also survived by her sister, Georgiana Berberich of New Ulm, Minnesota. Virginia was preceded in death by her husband, Elmer, her son, Terry Nelson, a brother, Kenneth Dugas and brother in law, Leonard Berberich. Blessed be her memory. In Lieu of Flowers, the family prefers memorials to Gilmor Manor or Gloria Dei Lutheran Church.

The family of Virginia L. Nelson created this Life Tributes page to make it easy to share your memories.