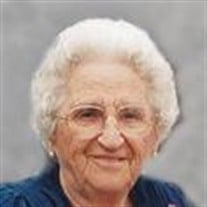 Viola Straumann, 95, of Redwood Falls died Tuesday, March 15, 2011 at Seasons in Redwood Falls. Funeral services will be held at 2 p.m. on Saturday, March 19, 2011 from St. John Evangelical Lutheran Church in Redwood Falls with burial in the Sanborn Cemetery, Sanborn. Visitation will be held on Friday, March 18, 2011, from 5 until 8 p.m., at the Nelson-Martin Funeral Home in Redwood Falls and will continue on Saturday at the church for one hour prior to services. Arrangements are with Nelson-Martin Funeral Service of Redwood Falls. E-mail condolences may be sent via www.nelsonmartinfuneralservice.com. Viola Barbara Henrietta (Weber) Straumann, the daughter of Casper and Hulda (Mueller) Weber, was born October 18, 1915 at Sanborn. Viola and her twin brother, Arnold, were the youngest of seven children. Viola grew up near Sanborn and was baptized and confirmed at Zion Lutheran Church in Sanborn. On May 26, 1942, Viola married Theodore Straumann at Zion Lutheran Church in Sanborn. The couple settled in rural Sanborn where Viola worked beside Theodore on their farm. Their marriage was blessed with five children, 17 grandchildren, and 24 great-grandchildren. Viola was actively involved in her church, most recently St. John Evangelical Lutheran Church in Redwood Falls. Her faith was very important to her. Viola always enjoyed babies and children. She also enjoyed playing cards and canning. Viola loved being with people and going to any party or family get-together. She is survived by her sons Richard (Vivian) of Arden Hills, Steven (Marilyn) of Hutchinson, and Gary (Sandy) of Redwood Falls; sons-in-law Dennis Kerkhoff of Morgan, and Randy (Diane) Madsen of Gibbon; 17 grandchildren; 24 great-grandchildren; and many other relatives and friends. Viola was preceded in death by her parents, Casper and Hulda Weber; her husband Theodore Straumann; her daughters Barbara Kerkhoff and Rebecca Madsen; and her sisters Alma (Henry) Kaehler, Marie (Martin) Kessler, and Laura (Theodor) Baur; and brothers Harold (Rose), Arnold (Laura), and Walter Weber in infancy. Blessed be her memory.

The family of Viola Barbara Henrietta Straumann created this Life Tributes page to make it easy to share your memories.

Send flowers to the Straumann family.