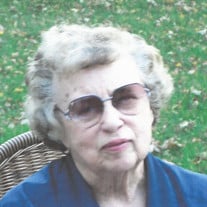 Viola Ane Marie Dahmes, age 93, of Redwood Falls died Sunday, February 16, 2020 at Wood Dale Nursing Home in Redwood Falls. Funeral services will be held at 11 a.m. on Wednesday, February 19, 2020 from St. John Lutheran Church in Redwood Falls with burial to follow in Bethany Lutheran Church Cemetery, Gilfillan, Minnesota. Visitation for the family will be held Wednesday, from 9:30 to 10:30 a.m. and a public visitation will be held from 10:30 a.m. until 11 a.m., at the church. Viola Ane Marie (Hoffbeck) Dahmes, the daughter of George and Ella (Nielson) Hoffbeck, was born into this world on January 1, 1927 in Redwood County, Minnesota. She was brought by her parents to be baptized in the name of the Triune God and made a member of the Lord’s Kingdom of Grace and an heir of Eternal Life on February 27, 1927 at Bethany Lutheran Church by Gilfillan, Rural Morgan, Minnesota. She was confirmed March 29, 1942 at Bethany Lutheran Church. She attended Country School in rural Morgan Township, Minnesota. She attended Lee’s School of Hairdressing in St. Paul, Minnesota and worked as a hairdresser in Morgan until her marriage to LaVerne Dahmes on April 18, 1946 at Bethany Lutheran Church. She and her husband farmed west of Redwood Falls until moving to farm near Fairfax, where they lived until moving to another farm west of Redwood Falls in 1953, after which they moved to their final farm near Gilfillan in 1965. After LaVerne’s passing 1996, she remained on the farm until 2001, when she moved to 515 Indal Street in Redwood Falls, Minnesota. She was a member of St. John Ev. Lutheran Church in Redwood Falls, where she served as a Sunday School teacher and Release Time teacher, a Special Ministries Visiting Team member, visiting shut-ins. She and LaVerne served as a Guide Family for a developmentally disabled person. She loved time with her family, reading, playing cards and doing latch hook. Her days were made joyful by her daily Bible verses, watching the changing seasons, a daily cup of hot tea, watching the first snowfall of the year, the first robin of Spring, and the Fall leaves colorful appearance. This past Sunday she joined Jesus in heaven. She had been living at Wood Dale Nursing Home during a long decline, and she and the family had been served by Carris Health Hospice Services. The family wishes to thank them for their knowledgeable and compassionate help during these difficult times. She was called to eternal rest on Sunday, February 16, 2020. The Lord granted her period of grace in this life to be 93 years, 1 month and 15 days. Awaiting the day of the resurrection of all flesh and a glorious reunion in heaven are her children: Alexis Dale Dahmes of Redwood Falls, Diane (Gary) Olsen of rural Renville, Carole (Peter) Lawson of Shoreview, and Michael (Linda) Dahmes of Redwood Falls; 16 grandchildren, 40 great-grandchildren and 8 great-great grandchildren; one brother, Floyd Hoffbeck, sister-in-laws Alvina Hoffbeck, Evie Hoffbeck and Ardith Hoffbeck. Viola was preceded in death by her husband, LaVerne; brothers, Raymond Hoffbeck, Earl Hoffbeck, Alvin Hoffbeck, Vernon Hoffbeck, Francis Hoffbeck and Norman Hoffbeck; a daughter-in-law, Eugenia Dahmes and a son-in-law, John Omtvedt. Blessed be her memory.

The family of Viola Ane Marie Dahmes created this Life Tributes page to make it easy to share your memories.

Send flowers to the Dahmes family.