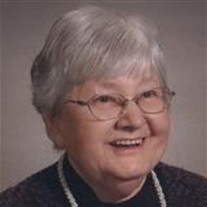 Veronica Mathiowetz, 96, of Morgan died September 15, 2014 at Gil-Mor Manor in Morgan. Mass of Christian Burial will be held at 10:30 a.m. on Thursday, September 18, 2014 from St. Michael’s Catholic Church in Morgan with burial to follow in the church cemetery. Visitation will be held on Wednesday, September 17, 2014, from 4 until 8 p.m., at Nelson-Martin Funeral Home in Morgan and will continue on Thursday at the church for one hour prior to services. Arrangements are with Nelson-Martin Funeral Service of Morgan. E-mail condolences may be sent via www.nelsonmartinfuneralservice.com. Veronica Elizabeth Mathiowetz, the daughter of Joseph and Mary (Rothmeier) Tauer, was born April 6, 1918 in Redwood County. She grew up in the Morgan area and received her formal education here. On April 8, 1942, Veronica married Andrew Mathiowetz at St. Michael’s Parish in Morgan. For the next three years the couple rented a farm six miles south of Clements. In 1945, they moved and rented a farm six miles northwest of Morgan (currently the Jim Mathiowetz farm.). In 1965, they purchased the farm across the field (currently Myron Mathiowetz farm.). In 1984, Veronica and Andy retired, after 42 years of farming, and moved to Morgan across from the Catholic Church. Veronica was a wife, mother, and homemaker who devoted her time to raising her six sons and six daughters. Once this was accomplished, she pursued some interests of her own. Veronica has been involved in mission quilting, visiting senior citizens at Gil-Mor Manor, playing cards, baking and gardening. She volunteered as a teacher’s aide for the first and second grades at St. Michael’s School. Veronica was a member of St. Michael’s Catholic Church, and their CCW and CUF. She also served as a 4-H leader. Veronica and Andy enjoyed traveling together. She is survived by her children James (Lorraine) of Morton, David (Bonnie) of Morgan, Diane (Rusty) Nelson of Lakeville, Al (Carol) of Mounds View, Virgil of St. Anthony, Virginia (Peter) Nikolai of Madison, Sharon (Douglas) Erickson of LeSueur, Loraine (Charles) Roger of St. Anthony, Mark (Lori) of Bloomington, Margaret (Lynn) Stoterau of St. Cloud, Myron (Becky) of Morton, and Melanie of St. Louis Park. Also surviving are 28 grandchildren; and 23 great-grandchildren. Veronica was preceded in death by her husband Andrew in 2004; grandson Barry Nikolai; daughter-in-law Lori Mathiowetz; brother Sylvester Tauer; and sisters Mary Reiner, Agnes (Mages) Schwab, Eleanor Heiling, and Lucille Mathiowetz. Blessed be her memory.

Veronica Mathiowetz, 96, of Morgan died September 15, 2014 at Gil-Mor Manor in Morgan. Mass of Christian Burial will be held at 10:30 a.m. on Thursday, September 18, 2014 from St. Michael&#8217;s Catholic Church in Morgan with burial to follow... View Obituary & Service Information

The family of Veronica Elizabeth Mathiowetz created this Life Tributes page to make it easy to share your memories.

Send flowers to the Mathiowetz family.