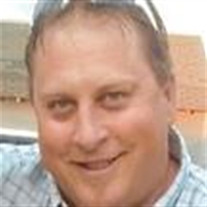 Todd Serbus, 46, of Redwood Falls died Monday, February 6, 2017 as the result of a motor vehicle accident. Mass of Christian Burial will be held at 10:30 a.m. on Saturday, February 11, 2017 from St. Catherine’s Catholic Church in Redwood Falls with burial to follow in St. Mary’s Catholic Cemetery, Bechyn. Visitation will be held Friday, February 10, 2017, from 4 until 8 p.m., with a prayer service at 8 p.m., all at St. Catherine’s Catholic Church. Visitation will continue on Saturday, from 9 until 10 a.m., at the church. Arrangements are with Nelson-Hillestad Funeral and Cremation Service of Redwood Falls. E-mail condolences may be sent via www.nelson-hillestad.com. Todd Michael Serbus, the son of Richard A. and Mary Nina (Lang) Serbus, was born December 23, 1970 in Olivia. He grew up in the Olivia and Redwood Falls areas. Todd graduated from Redwood Falls-Morton High School and then attended Hutchinson Technical College, graduating in 1991. On September 11, 1993, Todd married Colleen Ann Kretsch at St. Aloysius Catholic Church in Olivia and made their home in rural Redwood Falls. Todd was employed as a welder for Loftness in the Research & Development Department located in Hector, Minnesota. He was dedicated to laying down the most elite precision welds. Being extremely passionate about his job, he could lay a bead down on any surface. Prior to working as a welder, he was a self-employed truck owner/operator and a naturally born farmer. In his spare time, he preferred spending quality time having fun with his family and friends. He loved camping, fireworks, fishing, riding free on his Harley, hunting, football, cooking, skiing, snowmobiling, playing cards/dice & traveling to mention a few of his enjoyments. He is blessed with many incomparable talents; he could do anything! Socializing with people he loved was significantly important to Todd. He lived life to the fullest and his witty attitude was contagious. Todd could get anyone to smile. He never let anything bring him down, no matter what life threw at him. He had a tendency to leave a lasting impression on those who were ever blessed with his presence. Just like his loving parents, Todd would always be willing to provide for others, no matter the cost. He proved that money does not buy happiness, it is the unconditional love of family – biological or not – that makes you rich. Todd is survived by his wife, Colleen of Redwood Falls; children Samantha Serbus of McKinleyville, California, and Mitchell Serbus of Redwood Falls; and grandson Oliver Scharlemann-Serbus. Also surviving are his siblings Jeff (Cindy) Serbus of Jacksonville, North Carolina, Karen (Terry) Maiers of Stewart, Gloria (Brian) Greenslit of Franklin, Brenda (Harlan) Brue of Wakonda, South Dakota, Julie Serbus (special friend John Sander) of Renville, Kirt (Lori) Serbus of Olivia, Mary Jo Serbus of Apple Valley, Kevin Serbus (special friend Carrie McMasters) of Redwood Falls, Galen Serbus of Olivia, and Laura (Shawn) Curry of Olivia. Further surviving are his In-Laws who include Rodney & Bonita Leopold of Redwood Falls, John & Kathy Kretsch of Arden Hills, Camey Graham of Shoreview, Greg & Kimberly Malecek of Morgan, Carmen Prodoehl & special friend Ron Melby of Kasota, Miranda & Ben Anderson of Coon Rapids, Lori Schoening of Big Lake, Tharan & Ruth Leopold of Faribault.) Todd also had many nieces, nephews, aunts, uncles, cousins, and friends who were very important to him. He was preceded in death by his parents, grandparents, and his brother, Charles. Blessed be his memory.

Todd Serbus, 46, of Redwood Falls died Monday, February 6, 2017 as the result of a motor vehicle accident. Mass of Christian Burial will be held at 10:30 a.m. on Saturday, February 11, 2017 from St. Catherine&#8217;s Catholic Church in Redwood... View Obituary & Service Information

The family of Todd Serbus created this Life Tributes page to make it easy to share your memories.