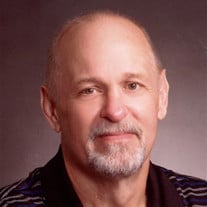 Thomas “Tom” Albrecht, age 63 of Redwood Falls, died unexpectedly at his home on Friday, October 12, 2018. Funeral Services will be held at 11 am Wednesday, October 17, 2018 from Gloria Dei Lutheran Church in Redwood Falls with burial in the Morgan City Cemetery. Visitation will be held Tuesday, October 16, 2018 from 4 until 8 pm at Nelson-Hillestad Funeral Home of Redwood Falls and will continue for 1 hour prior to services at church on Wednesday. Arrangements are with Nelson-Hillestad Funeral and Cremation Service of Redwood Falls. Email condolences may be sent via www.nelson-hillestad.com. Tom Albrecht was born in New Ulm, Minnesota on November 3, 1954 to Reginald “Bud” and Shirley (Netzke) Albrecht. His family moved to their Family Farm by Morgan, then in1961 they moved to Lamberton where he graduated from Lamberton High School. He also attended St. Cloud State University. In 1979 he moved to Dickenson, North Dakota to work in the oil fields. In 1981 he moved to Redwood Falls to help with his parents. Tom worked for Schult Mobile Homes for 35 years as a carpenter until his retirement in January 2017. Tom was an active member of Gloria Dei Lutheran Church, where he was involved in many programs and activities, one of which was making wooden baptism boxes. An avid member of the Sons of the American Legion of Redwood Falls, where he was a big part of preparing meals they provided. Tom enjoyed fishing and woodworking, visiting and spending time with family and friends. He also enjoyed gardening and was known for his amazing salsa. He was always game for a trip or an event. Tom is survived by his brothers, Jay (Sandy) Albrecht of Elk River and Roger (Kathy) Albrecht of Mankato; and nieces and nephews, Jessica Albrecht, Adam Van Albrecht, Eva Blanchard, Laura Dwyer, Krista Neese, Ben Albrecht, Julie Busch, Jeff Albrecht, Greg Albrecht and Rusty Albrecht. He was preceded in death by his parents and his brother Charlie in 2012. Blessed be his memory.

The family of Thomas "Tom" Albrecht created this Life Tributes page to make it easy to share your memories.

Send flowers to the Albrecht family.