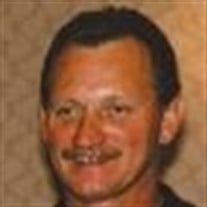 Terry Dallenbach, 65, of Morton died Sunday, September 20, 2015 at Sunwood Good Samaritan Center in Redwood Falls. Mass of Christian Burial will be held at 10:30 a.m. on Friday, September 25, 2015 from St. John’s Catholic Church in Morton. Burial, with full military honors, will follow in the church cemetery. Visitation will be held Thursday, September 24, 2015, from 4 until 8 p.m., with a prayer service at 7 p.m., all at Nelson-Hillestad Funeral Home in Redwood Falls. Visitation will continue on Friday at the church from 9:30 until 10:30 a.m. Arrangements are with Nelson-Hillestad Funeral Service of Redwood Falls. E-mail condolences may be sent via www.nelson-hillestad.com. Terry Lee Dallenbach, the son of Leland “Bud” and Betty (Sackett) Dallenbach, was born April 15, 1950 in Redwood Falls. He grew up in Morton received his formal education in Morton public school. Terry was inducted into the United States Marine Corp on January 14, 1969 and served in Vietnam until his honorable discharge on July 6, 1970. He was very proud to be a Marine and lived by the Marine code, “Semper Fi.” Following the service, Terry worked on the pipeline with his Uncle Denny and later for Royal Construction, the Chicago-Northwestern Railroad, and Henry’s Candy. In 1976, he began driving truck for Harvestland Cooperative where he worked until retiring as a 100% disabled veteran. On December 6, 1975, Terry married Sue Wells. They lived in Minneapolis for six months before moving to Morton. Terry was a great athlete. He boxed in the Marines and later, in 1979, he played on the semi-pro football team, “The All American Bar” in Minneapolis with his brother Mike, Chuck Senkyr and Bob Gallery. Terry loved to play softball and was an avid weight lifter. Terry also was a great cook, like his mother. Terry was a jack of all trades and he loved helping the elderly in Morton however he could – be it chores, or a visit and coffee. As he cared about Morton’s youth, he ran the Dafy Club. He always said it took a community to raise our youth. Terry helped organize the new playground in Morton and made sure it featured Morton’s colors – Blue & Gold. He was very proud of being from Morton. Terry was a member of St. John’s Catholic Church and Morton’s Dafy youth group. He served on the Morton police department, the Morton City Council and the Morton Fire Department. Terry loved bow hunting, watching old westerns on TV, playing on-going games of cribbage and dominoes, and going to Zac’s on Sunday’s to watch sports. His friends always teased that Zac was the “other wife.” Terry loved his children and grandchildren deeply and enjoyed hanging out with them and teaching them about sports. They loved to play practical jokes on each other. Terry taught them to be good people, good students and to respect their elders. He is survived by his wife Sue Dallenbach of Morton; daughter Jamie Dallenbach of Morton; grandchildren Americis, Marcellus, Branndon, and Rex; brother Mike Dallenbach of Morton; and sisters Linda Dallenbach of Redwood Falls, Bev (Denny) Roper of Morton, Vickie Dallenbach of Morton, and Nicole Ahlbrecht of Fairfax. He was preceded in death by his son Josh Dallenbach, and his parents Betty and Leland Dallenbach. Blessed be his memory.

The family of Terry Lee Dallenbach created this Life Tributes page to make it easy to share your memories.

Send flowers to the Dallenbach family.