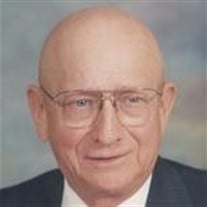 T. Delbert Kettner, 88, of Morgan died Wednesday, September 10, 2014 at Gil-Mor Manor in Morgan. Funeral services will be held at 10:30 a.m. on Monday, September 15, 2014 from St. John Lutheran Church in Morgan. Burial, with military honors, will follow at the church cemetery. Visitation will be held Sunday, September 14, 2014, from 4 until 8 p.m., at the church and will continue Monday at the church for one hour prior to services. Arrangements are with Nelson-Martin Funeral Service of Morgan. E-mail condolences may be sent via www.nelsonmartinfuneralservice.com. Theodore Delbert Kettner, the son of Theodore and Frieda (Drusch) Kettner, was born March 30, 1926 on the family farm in Sundown Township, Redwood County, Minnesota. He grew up on the family farm and received his elementary education at Sundown District 27 country school. Delbert was baptized and confirmed at St. Paul’s Lutheran Church in Springfield. He graduated from Springfield High School in 1943 and then attended the University of Minnesota. Delbert served his country during World War II with the United States Navy. Following his honorable discharge, he attended Vet’s Ag School. On August 20, 1948, Delbert married Joan Balfany in Belview and they farmed in Sundown Township. In 1960, they moved to a farm in Eden Township, Brown County, near Morgan and farmed there as well as in Sundown Township. Delbert and Joan moved into Morgan in 1974 and continued to farm. After his health failed in 2011, he moved to Garnette Gardens in Redwood Falls and in November 2013 to Gil-Mor Manor. Delbert was a life-long farmer, raising both crops and cattle. He was most proud when the family farm in Sundown Township, which is now being farmed by the sixth generation, was recognized as a Century Farm. Although he was a farmer by trade, his love for his country was evident by his service with numerous organizations. Delbert was a life-member of the VFW in Morgan where he held many offices. He served as VFW District Commander in 1973-74, and served on state and national committees. He was also a life-member of the Springfield American Legion. Delbert was active in the DFL and served on local, state and national committees. He was a board member and officer of the Minnesota Inventors Congress, was the Red Cross Military Liaison, belonged to the Cooties, and the Morgan Sportsman’s Club. Delbert’s vision for future generations lead him to develop Kettner Landing along the Minnesota River by deeding the property to the DNR to allow everyone to enjoy the river. Delbert was an active member of St. John Lutheran Church in Morgan and served on the church council. His sense of humor was a gift he freely shared with others. Delbert had a God-given talent to carry on a conversation with anyone – including total strangers. It seemed to his family that, no matter where they traveled, Delbert found someone he knew and had a story to tell. Visiting was one of his most favorite past times. Those who knew Delbert will agree that he is most likely NOT resting now – but rather enjoying being part of the conversation once again, telling many stories that he is now able to remember and communicate to those willing to listen. We are thankful that his passing went quickly and that his mind has now found peace. Delbert will be truly missed by his children Charles (Sharon) Kettner of East Aurora, New York, Charlotte (David) DeGrote of Alexandria, and Roger (Sandy) Kettner of Morgan; grandchildren Paul (Zephyr) DeGrote of San Francisco, California, Jennifer (Ted) Harding of Minnetonka, Derek Kettner of Buffalo, New York, Alex (Kendra) Kettner of Groton, South Dakota, and Daniel Kettner (special friend Ashley Ruch) of Morgan. Also surviving are great-grandchildren Henry “Hank” and Paige Harding of Minnetonka, Ella and Weston Kettner of Groton, South Dakota, and Hugo DeGrote of San Francisco; siblings Betty (Cecil) Seim of Eagan, Ardis (Max) Groebner of New Ulm, and LaRell (Shirley) Kettner of Springfield; nephews, nieces, and a host of friends. He was preceded in death by his wife Joan in 1996. Blessed be his memory.

The family of T. Delbert Kettner created this Life Tributes page to make it easy to share your memories.

Send flowers to the Kettner family.