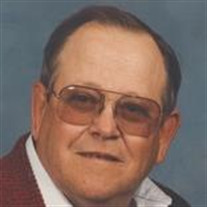 Stanley Moritz, 80, of rural Redwood Falls died Monday, October 19, 2015 at his home. Funeral services will be held at 10:30 a.m. on Thursday, October 22, 2015 from St. John Evangelical Lutheran Church in Redwood Falls with military honors immediately following. Burial will be at a later date. Visitation will be held Wednesday, October 21, 2015, from 4 until 7 p.m., at Nelson-Hillestad Funeral Home in Redwood Falls and will continue on Thursday at the church from 9:30 until 10:30 a.m. Arrangements are with Nelson-Hillestad Funeral Service of Redwood Falls. E-mail condolences may be sent via www.nelson-hillestad.com. Stanley Howard Moritz, the son of Frank and Minnie (Schmidt) Moritz, was born August 20, 1935 in Redwood Falls. Stan grew up on the family farm, where he has resided since. On June 8, 1958, Stanley married Theresa Hoppke at St. John’s Lutheran Church. They farmed Moritz Farms until Stan’s retirement in 2009. Following retirement, they continued to live on the family farm. Stan enlisted in the Minnesota Army National Guard Tank Command on January 9, 1954. He was transferred to the National Guard of Minnesota on January 9, 1957 and served until his honorable discharge on January 8, 1960. Stan was a member of St. John Evangelical Lutheran Church and served on the finance committee and the church council. He served on the Delhi Township Board and the North Redwood Farmers Elevator Board. Stanley is survived by his wife Theresa of Redwood Falls; daughter Lori (Al) Lidbeck of Bird Island; and son Tim (Jennifer) Moritz of Redwood Falls; grandchildren Andrea (Kris) Jedda and Shara (Trevor) Sharbach; great-grandchildren Kiara Warner, Cullen Jedda, and Taylor Sharbach; and his best friend, “Lucky,” his dog. He was preceded in death by his parents and his sister Donna Arndt. Blessed be his memory.

The family of Stanley "Stan" Howard Moritz created this Life Tributes page to make it easy to share your memories.

Send flowers to the Moritz family.