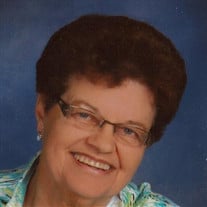 Shirley Smetak, 79, of Redwood Falls died Tuesday, March 29, 2016 at Season’s hospice in Redwood Falls. Funeral services will be held at 10:30 a.m. on Tuesday, April 5, 2016, from St. John Evangelical Lutheran Church in Redwood Falls with burial to follow in the Redwood Falls Cemetery. Visitation will be held Monday, April 4, 2016, from 4 until 7 p.m. at Nelson-Hillestad Funeral Home in Redwood Falls and will continue on Tuesday at the church from 9:30 until 10:30 a.m. The family prefers memorials be directed to the Wounded Warrior Project. Arrangements are with Nelson-Hillestad Funeral and Cremation Service of Redwood Falls. E-mail condolences may be sent via www.nelson-hillestad.com. Shirley Ann Smetak, the daughter of John and Gertrude (Wafer) Zamzow, was born April 23, 1936 in Redwood Falls. She grew up in the Clements area and in Redwood Falls. Shirley married Lyle Smetak and they make their home in Clements and Redwood Falls. Shirley worked as a waitress, an Avon representative, and in the healthcare field until her retirement in 1997. She was a member of St. John Evangelical Lutheran Church and the V.F.W. Auxiliary. Shirley loved to camp, read, and visit with friends and family on her patio. She is survived by her son Randy Smetak (significant other, Marie Meyers) of Redwood Falls; grandson Josh (Sadie) Smetak, and their children Reese, Travet, Mason and Bridger; grandson Shane Sallee (significant other Amanda Hopkins) and their children Peyton and Cullen; and her brother Oliver “Jim” Zamzow of Sleepy Eye. Shirley was preceded in death by her parents; husband Lyle; brothers Marlin, Delta, Lester, John and Denny Zamzow; and sisters Inez Schons and Fern Kitzmann. Blessed be her memory.

The family of Shirley Smetak created this Life Tributes page to make it easy to share your memories.

Send flowers to the Smetak family.