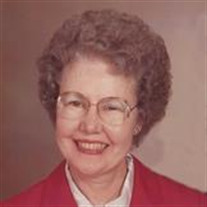 Rosemary Wilcoxon, 87, of Redwood Falls died peacefully and of natural causes on Monday, February 13, 2012 at Wood Dale Home in Redwood Falls. Funeral services will be held at 1 p.m. on Friday, February 17, 2012 from First United Methodist Church in Redwood Falls with burial to follow at Crestlawn Gardens, rural Redwood Falls. Visitation will be held at the church on Friday for one hour prior to services. Arrangements are with Nelson-Martin Funeral Service of Redwood Falls. E-mail condolences may be sent via www.nelsonmartinfuneralservice.com. Rosemary Frances Wilcoxon, the daughter of Carl and Eva Peick, was born September 3, 1924. She grew up in Slayton. Rosemary, whose nickname was Posy, attended Macalester College and graduated from Northwestern School of Nursing, Minneapolis, in 1946. Rosemary married J. Robert Wilcoxon, her high school sweetheart, in 1945. They lived in Minneapolis, then Heron Lake, before moving to Redwood Falls in 1959. Rosemary worked as an RN briefly at Sister Kenny and Heron Lake Hospital before her children were born. She completed additional nursing coursework at Phoenix College in 1969 and worked part time and volunteered at Sunwood Good Samaritan Care Center over the years. Rosemary was an active member of the First United Methodist Church where she taught Sunday school for many years. She held offices in United Methodist Women’s Club as well as Study Club, Eastern Star, and General Federation of Women’s Clubs. Rosemary was a charter member of Sunwood Good Samaritan Nursing Home Auxiliary. She loved spending time at the lake, as a youth at her family’s cabin on Lake Shetek, and with her children at Lake Okoboji. Rosemary loved music and dancing; she had a beautiful singing voice. She had a lifelong interest in health and nutrition. Rosemary enjoyed playing scrabble, reading biographies, Bible study, and cheering on her favorite sports teams. She loved growing flowers and vegetables in her garden, and feeding and watching the birds. Rosemary is survived by her children Pamela Conn (Thornton Cooke) of New Fairfield, Connecticut, Kathe Wilcoxon (Robert Jensen) of Minneapolis, Sandra Greene (Gordon) of Rochester, and John Wilcoxon (Jean) of Luck, Wisconsin. Also surviving are her grandchildren Tracy (Ben) Suhr, Matt Conn, Philip Greene, Alex (Linda) Greene, Robert Wilcoxon, and Thatcher Jensen; four step-grandchildren; and six great-grandchildren. She was preceded in death by her husband Dr. J.R. Wilcoxon in 1988; and her brothers Charles Peick and Phillip Peick. Blessed be her memory.

The family of Rosemary Frances Wilcoxon created this Life Tributes page to make it easy to share your memories.

Rosemary Wilcoxon, 87, of Redwood Falls died peacefully and of...

Send flowers to the Wilcoxon family.