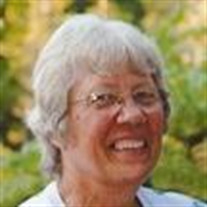 Rosemary “Rosie” Lund, 73, of Morgan died peacefully at her home on April 7, 2018. Memorial Services will be held at 11 a.m. on Thursday, April 12, 2018 from St. Michael’s Catholic Church in Morgan with inurnment at a later date in the church cemetery. Visitation will be held Nelson-Hillestad Funeral Home in Morgan on Wednesday, from 4 until 8 p.m., with a prayer service at 7 p.m. Visitation will continue on Thursday, from 10 until 11, at the church. Arrangements are with Nelson-Hillestad Funeral and Cremation Service of Morgan. Condolences may be sent via www.nelson-hillestad.com. Rosemary Irene Lund, the daughter of Alphonse and Alice (Wagner) Beert, was born October 31, 1944 in Lucan. She grew up in Morgan and received her elementary education in St. Michael’s School. Rosie graduated from Morgan High School in 1962 and then attended Mankato State University. On April 18, 1964, Rosemary married Derold P. Lund at St. Michael’s Catholic Church. The couple lived in Eagle Grove Iowa, Excelsior and Shakopee before settling in Morgan in 1968. She operated Rosie’s Daycare for 48 years. Rosie had to close the daycare on March 19, 2018 but her family knows she is still babysitting in heaven! Rosie was a member of St. Michael’s Catholic Church and served as a religion teacher at St. Catherine’s in Redwood Falls. She enjoyed spending time with her family and attending their various events. Rosie is survived by her husband Derold of Morgan; children James (Bonnie) Lund of Franklin, William (Kimberly) Lund of Morgan, Wayne (Amy) Lund of Lake Crystal, and Brenda (Jason) Sommers of Redwood Falls; and siblings Russel (Ruth) Beert of Morgan, Leonard (Delores) Beert of Onamia, David (Marty) Beert of Gig Harbor, Washington, and Connie (Gary) Kodet of Clements. Also surviving are her grandchildren Justin and Jared Mitchell, Brianna and Jordan Lund, Bailey and Cameran Sommers, Paityn, Jessica and Bryce Lund, Sydney Sommers, and Taitem Lund; great-grandchildren Teigen, Tatiyana, and Brantley Mitchell; and a host of daycare kids. She was preceded in death by her daughter Christine Lund and sister Kathleen Griffin. Blessed be her memory.

The family of Rosemary "Rosie" Irene Lund created this Life Tributes page to make it easy to share your memories.

Rosemary “Rosie” Lund, 73, of Morgan died peacefully at her home...

Send flowers to the Lund family.