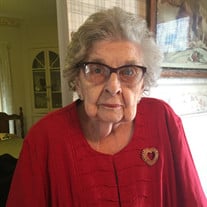 Rosemary Maxine Bloedow (Darkow), age 97, of Redwood Falls passed away peacefully surrounded by her family on Saturday, September 16, 2017 at Season’s Hospice Home in Redwood Falls. Funeral services will be held at 11:00 a.m. on Saturday, September 23, 2017 from Gloria Dei Lutheran Church in Redwood Falls with burial to follow in the Christ Lutheran Cemetery in Wanda. Visitation will be held at Gloria Dei Lutheran Church on Saturday, September 23, 2017 from 9:30 a.m. until 11:00 a.m., at the church. Rosemary was blessed with 4 children, Bob, Gayle, Charles and Judy; 9 grandchildren, Jesse, Janée, Jon, Heidi, Scott, Jeremy, Alison, Melissa, Shannon; and 18 great-grandchildren. Growing up in Wanda, MN during the depression years, she remembered that even though no one had a lot of money, they always had a lot of fun enjoying free movies “uptown” shown on the sides of buildings or going to her Aunt Polly and Uncle Hank Albertson’s. A teacher by training and by trade, Rosemary also lived and worked the Bloedow Farm with her husband Winfield. After his passing in 1959, Rosemary went back to teaching, graduating from Mankato State in 1965 with a degree in education and serving rural schools and teaching 4th Grade in her home of Redwood Falls, until retiring in 1985. In addition to her love of travel, Rosemary’s favorite memories were spending time in the summer “at the cabin” on Green Lake. Joining Gloria Dei Church in 1965, Rosemary served as a deacon, circle member, altar guild president, library building board member and was inducted into the Redwood Hall of Fame. Rosemary was also an active member of the funeral and services team. She crocheted prayer shawls for the sick and made baptismal towels. Rosemary was an incredible quilter, creating hundreds of beautiful quilts for family, friends and those in need. In the quilt of life, Rosemary’s legacy was bringing her strong sense of faith to serve her community; devoting her time, energy and creativity to teach our children; and ultimately stitching her friends and family together to keep them safe and warm - always. Family prefers memorials to the Christ Lutheran Cemetery in Wanda. Arrangements are with Nelson-Hillestad Funeral and Cremation Service of Redwood Falls. E-mail condolences may be sent via www.nelson-hillestad.com. Blessed be her memory

The family of Rosemary Bloedow created this Life Tributes page to make it easy to share your memories.

Send flowers to the Bloedow family.