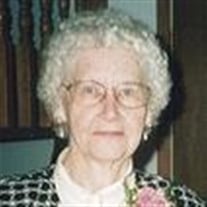 Rose Helen Spangler, 88, of Morgan died Monday, April 18, 2011 at Golden Living Center in Franklin. Mass of Christian Burial will be held at 11 a.m. on Monday from St. Michael’s Catholic Church in Morgan with burial to follow in the church cemetery. Visitation will be held Monday, from 9 until 11 a.m. at the church. Arrangements are with Nelson-Martin Funeral Service of Morgan. E-mail condolences may be sent via www.nelsonmartinfuneralservice.com. Rose Jenniges Spangler, the daughter of Bernard “Ben” and Rosa (Otte) Jenniges, was born November 27, 1922 on the family farm near Wanda. She was her parents’ only daughter and grew up with eight brothers. Rose went to grade school in Wanda by bus, but had to walk down the three-quarter mile long lane in the cold winter. No slacks or pants for Rose. As her Pa said, “She’s a girl and she’s going to dress like one!” Rose finally got a pair of pants when she was about 15 years old. Rose went to high school in Lamberton, graduating in 1940. She then attended business school in Mankato for a year and worked as a secretary at Deike’s Moving & Storage Company in Mankato. On October 20, 1943, Rose married Joseph John Spangler at St. Mathias Catholic Church in Wanda. They farmed one mile north of Morgan until retiring in 1981; they moved into Morgan 10 years later. Joe passed away in 1998 and Rose continued to live in Morgan until 2006 when she moved to Garnette Gardens in Redwood Falls. She relocated to Keelson Harbour Memory Care in Spirit Lake, Iowa in 2008, and in February 2011 moved to Golden Living Center in Franklin. In addition to farming with her husband, tending to an acre-size vegetable garden and raising 10 children, Rose acted in community plays, served as secretary on the St. Michael’s Elementary School Board, was the Librarian at the Morgan Public Library for 10 years, was a founding member and president of New Horizons, and volunteered at St. Michael’s Elementary School library. She enjoyed crocheting, spoiling her grandchildren, embroidery, quilting, and being active in several card clubs. Rose is survived by her children Connie Marben of Lamberton, Stan Spangler of Savage, Annette Majerus of St. Cloud, Eugenie (Greg) Burns of Shoreview, Debra (Jim) Kelley of Farmington, Damien Spangler of Portland, Oregon, Joni Spangler of Williamsburg, Virginia, Lori Spangler of Vadnais Heights, and Jim (Colleen) Spangler of Morgan; 21 grandchildren; and 23 great-grandchildren. Also surviving are her brothers Omer Jenniges of Wanda, Yvo Jenniges of Glenwood, and Alphonse Jenniges of Brainerd. She was preceded in death by her husband Joe in 1998; son Jerry in 2000, grandson Taylor Spangler; son-in-law Paul Marben; and brothers Reinhardt, Barney, Ambrose, Dennis, and Adrian. Blessed be her memory.

Rose Helen Spangler, 88, of Morgan died Monday, April 18, 2011 at Golden Living Center in Franklin. Mass of Christian Burial will be held at 11 a.m. on Monday from St. Michael&#8217;s Catholic Church in Morgan with burial to follow in the church... View Obituary & Service Information

The family of Rose Helen Spangler created this Life Tributes page to make it easy to share your memories.

Send flowers to the Spangler family.