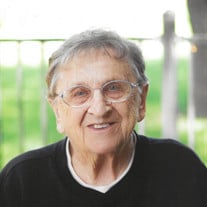 Rose Carlson, 95, of Morgan, Minnesota, passed away on Tuesday, October 13, 2020 at Gil Mor Manor, Morgan. A Mass of Christian Burial will be at 2:00 pm on Friday, October 23, 2020 at St. Michael’s Catholic Church of Morgan with burial to follow in the St. Michael’s Catholic Cemetery. Visitation will be on Friday from 1 until 2 pm at St. Michael’s Catholic Church Rose Marie Carlson was born to Gottfried and Rose (Brack) Kober in Sheboygan, Wisconsin, on November 26, 1924. Her German parents immigrated to Wisconsin from the Volga region of the Soviet Union to escape the Bolshevik Revolution. Rose grew up in Sheboygan and in Winthrop, Minnesota, where she graduated from high school. Rose was an active member of St. Michael’s Catholic Church, the Ladies Altar Society, and the National Council of Catholic Women (CCW). She was a charter and continuous member of the New Horizons Club and a member of The Harmony Homemakers. An avid card player, Rose belonged to several groups that met regularly, and enticed her family to play cards with her at every opportunity! She also enjoyed knitting, crocheting, dancing, and road trips. She was a loving wife, mother, grandmother, great-grandmother, and great-great-grandmother. She greatly enjoyed spending time with her family and was known for her chocolate chip cookies, which her kids and grandkids ate by the dozen. Married to Gordon Carlson of rural Morgan for 73 years, Rose, a city girl, adapted to life on the farm and raised her five children there. As her children got older, Rose stepped outside of her role as farm wife to work at the Village Inn, a local restaurant, and as a cook at Gil-Mor Manor in Morgan. Rose is survived by her children: Betty Murray, Tulsa, OK; Jack (Char) Carlson, Morgan; Sandy Carlson, Morgan; Nancy Carlson, Ellensburg, WA; and Jim (Kelly) Carlson, Olivia; and by her six grand-children, six great-grand-children, and one great-great-grandchild; as well as numerous nieces and nephews and other relatives and friends. Rose is preceded in death by her parents, Gottfried and Rose Kober; husband, Gordon Carlson; sister, Emily Totman; and brothers Gottlieb (George), John, Chris, and Gottfried (Freddie) Jr., as well as siblings Emily, Marie, and David who died of diphtheria before arriving in America. Blessed be her memory.

The family of Rose Carlson created this Life Tributes page to make it easy to share your memories.

Rose Carlson, 95, of Morgan, Minnesota, passed away on Tuesday,...

Send flowers to the Carlson family.