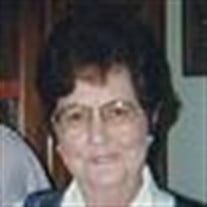 Rose Bucholz, 82, of Morton died Friday, January 27, 2012 at Wood Dale Nursing Home in Redwood Falls. Funeral services will be held at 11 a.m. on Monday, February 6, 2012 from First Presbyterian Church in Redwood Falls with burial to follow in the Morton City Cemetery. Visitation will be held at the church on Monday for one hour prior to services. Arrangements are with Nelson-Martin Funeral Service of Redwood Falls. E-mail condolences may be sent via www.nelsonmartinfuneralservice.com. Rose Adele Bucholz, the daughter of Carl and Alma (Englund) Miller, was born November 9, 1929 in Redwood Falls. She was raised in Redwood Falls and received her formal education in Redwood Falls schools. On December 13, 1947, Rose married Otto Bucholz, Jr. of Morton. While the couple lived in the Twin Cities, Rose was employed at FMC Corporation in Fridley for 17 years. Approximately 18 years ago, Rose and Otto relocated to Morton where Rose worked at Jackpot Junction for several years. She was a member of First Presbyterian Church in Redwood Falls. Rose is survived by her daughters Cynthia Miller-Puent (Greg Puent) of Princeton, and Linda Whitaker of Redwood Falls; daughter-in-law Linda Bucholz of Redwood Falls; grandchildren Steve Whitaker of Redwood Falls, Leila (Rob) Sissi of Blaine, Mark Bucholz of Milaca, Mario DeStefano, Ashley Bowman, Lacey O’Sullivan, and Addie O’Neil; and six great-grandchildren. She was preceded in death by her husband Otto Bucholz, Jr. on July 6, 2009; and her son Steven Bucholz on December 7, 2011. Blessed be her memory.

The family of Rose Adele Bucholz created this Life Tributes page to make it easy to share your memories.

Send flowers to the Bucholz family.