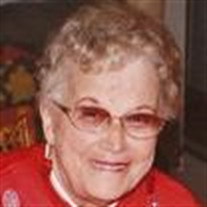 Rosalyn Sell, 87, of Morgan died Friday, May 6, 2016 at Gil-Mor Manor in Morgan. Mass of Christian Burial will be held at 10:30 a.m. on Thursday, May 12, 2016 from St. Michael’s Catholic Church in Morgan with burial to follow in the church cemetery. Visitation will be held Wednesday, May 11, 2016, from 5 until 8 p.m., with a prayer service at 7 p.m., all at Nelson-Hillestad Funeral Home in Morgan. Visitation will continue on Thursday, from 9:30 until 10:30 a.m., at the church. The family prefers memorials be directed to Redwood Area Hospice. Arrangements are with Nelson-Hillestad Funeral and Cremation Service of Morgan. E-mail condolences may be sent via www.nelson-hillestad.com. Rosalyn Mathilda Sell, the daughter of Joseph and Elizabeth (Schunk) Platz, was born May 16, 1928 in Springfield. She grew up in the Springfield area and received her formal education there. On June 9, 1947, Rosalyn married Larry Sell at St. Raphael’s Catholic Church in Springfield and they made their home on the home farm near Morgan. Rosalyn was a homemaker and enjoyed quilting, crocheting, needlework and ceramics. She loved to spend time with her grandchildren, and go fishing with Larry. Rosalyn was a member of St. Michael’s Catholic Church and the CCW. She is survived by her husband Larry Sell of Morgan; children Doug (Becky) Sell of Morgan, Dave (Mary) Sell of Bloomington, and Darlene (Ivan) Anderson of Springfield; seven grandchildren; and 13 great-grandchildren. Rosalyn is also survived by her sisters Marian Roiger of Springfield and Margie Boklep of Hopkins; brothers Joe (Janet) Platz of New Ulm, Jim (Judy) Platz of Hudson, Wisconsin, Pat (Debbie) Platz of Sparks, Nevada, Tom (Jeri) Platz of Sanborn, and Bernie Platz of Lewiston, Idaho; and sister-in-law Joyce Platz of Comfrey. She was preceded in death by her son Dale Sell in 1978; her sisters Doris Goettig and Elizabeth Bolinger; and brother Ken Platz. Blessed be her memory.

The family of Rosalyn Sell created this Life Tributes page to make it easy to share your memories.

Send flowers to the Sell family.