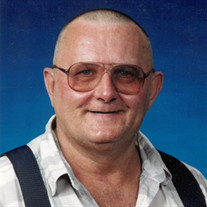 Roger Serbus, 70, of Redwood Falls died Thursday, April 11, 2019 at Carris Health - Redwood Area Hospital. Memorial Services will be held at 2 p.m. on Tuesday, April 16, 2019 from Nelson-Hillestad Funeral Home in Redwood Falls, with burial to be held at a later date in the St. Mary’s Catholic Cemetery in Bechyn, Minnesota. Visitation will be held Tuesday, April 16, 2019, from 1 until 2 p.m., at the funeral home. Arrangements are with Nelson-Hillestad Funeral and Cremation Service of Redwood Falls. E-mail condolences may be sent via www.nelson-hillestad.com. Roger Adolph Serbus, the son of David and Elnora (Hinek) Serbus, was born on June 10, 1948 at the Redwood Falls Hospital. Roger attended school in Morton, Minnesota. Lived on a farm for most of his life in Renville County. Roger worked on the farm, worked for Serbus Gravel, Revier Firestone, Redwood Recycling and as a farm hand for Jerry & Clara Kodet. He moved to Redwood Falls in the past few years. Roger loved playing cards, shooting pool and taking car rides in the country. He also enjoyed stopping at family and friends to eat and visit with them. Roger is survived by siblings: Marlyce Schuette, Gordon Serbus, Charlotte Burgemeister, Greg (Deb) Serbus, Theresa (Rick) Schumacher and Kathleen (Brad) Plowman. He is also survived by several nieces and nephews. Roger is preceded in death by his parents, David and Elnora Serbus. Blessed be his memory.

The family of Roger Serbus created this Life Tributes page to make it easy to share your memories.