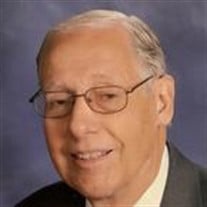 Roger D. Melquist, 74, of Norwood Young America and formerly of Morton, died Thursday, January 19, 2017 at Harmony River Living Center in Hutchinson. Funeral services will be held at 10 a.m. on Thursday, January 26, 2017 from the Assembly of God Church in Redwood Falls. Military honors will follow, with burial in the Morton City Cemetery. Visitation will be held on Wednesday, January 25, 2017, from 5 until 7 p.m., at Nelson-Hillestad Funeral Home in Redwood Falls and will continue on Thursday, from 9 until 10 a.m., at the church. Arrangements are with Nelson-Hillestad Funeral and Cremation Service of Redwood Falls. E-mail condolences may be sent via www.nelson-hillestad.com. Roger Dale Melquist, the son of Philip and Evelyn (Norskog) Melquist, was born January 19, 1943 in Redwood Falls. He was baptized in the English Lutheran Church, Palmyra Township, Renville County and confirmed in First English Lutheran (Gloria Dei) Church in Redwood Falls. Roger grew up in the Beaver Falls/rural Morton area and received his formal education in Morton Public School. He graduated from Morton High School in 1961 and went on to earn his Bachelor’s degree from Minnesota State University, Mankato. Roger later earned his Master’s degree from the University of South Dakota. He attended Berean Bible School and Luther Seminary where he became equipped to be a minister of the Gospel. Roger was inducted into the United States Army on May 19, 1966 and served our country with the 93rd Engineering Battalion in Vietnam. He was honorably discharged on March 17, 1968. Roger married Helen M. Viesselman on December 19, 1970 at the Congregational Church in Fairmont. His life’s work of teaching history and science on the high school level, coaching cross country and track, teaching college courses, and pastoring took the Melquists to several Minnesota towns, including St. James, New Richland, Hartland, St. Paul, Beaver Falls, Morton, Verndale, Perham, and Fairfax – as well as a year-long stint in Vermillion, South Dakota. Roger retired from the Fairfax United Methodist Church in April 2015 and he and Helen relocated to Norwood Young America. He was a member of the Assembly of God Church, the American Legion, and the Gideons. In his spare time, Roger enjoyed carpentry, fishing, hunting, sand casting, gardening, and genealogy. Roger is survived by his wife, Helen of Norwood Young America; children Wendy (Dwayne) Boyum of Glencoe, and Jason Melquist of Chaska; grandchildren Christopher Boyum, Elizabeth (Tyler) Palma, Gregory Boyum, Ryan Melquist, Mackenzie Melquist, and Eli Melquist; and sisters Lois Conner of Hugo, and Elaine (Kurt) Melquist-Schroeder of New Hampshire. He was preceded in death by his parents, Philip and Evelyn (Norskog) Melquist, and brother-in-law Wallace Conner. Blessed be his memory.

Roger D. Melquist, 74, of Norwood Young America and formerly of Morton, died Thursday, January 19, 2017 at Harmony River Living Center in Hutchinson. Funeral services will be held at 10 a.m. on Thursday, January 26, 2017 from the Assembly of... View Obituary & Service Information

The family of Roger D. Melquist created this Life Tributes page to make it easy to share your memories.

Send flowers to the Melquist family.