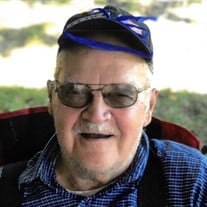 Robert “Bob” A. Knapp, age 79, of Redwood Falls passed away peacefully on Saturday, May 15, 2021 at Gil-Mor Manor Nursing Home in Morgan, Minnesota. Mass of Christian Burial will be held at 10:30 a.m. on Friday, May 21, 2021 from St. Catherine’s Catholic Church in Redwood Falls. Burial, with full military honors, will follow in the St. Catherine’s Catholic Cemetery, Redwood Falls. Visitation will be held Thursday, May 20, 2021, from 5 until 7 p.m., with a Parish Prayer Service at 7 p.m., St. Catherine’s Catholic Church in Redwood Falls. Visitation will continue on Friday, from 9:30 until 10:30 a.m., at the church. Arrangements are with Nelson-Hillestad Funeral and Cremation Service of Redwood Falls. E-mail condolences may be sent via www.nelson-hillestad.com. Robert “Bob” Arthur Knapp, the son of Magnus and Cora (Wolters) Knapp was born on April 16th, 1942 in Redwood Falls, MN. He was baptized and confirmed in Redwood Falls at Gloria Dei Lutheran church. He attended school at Redwood Falls High School in Redwood Falls, MN and graduated in 1959. In 1963 Bob enlisted in the United States Army where he served for three years as a mechanic until 1966. After returning to Redwood Falls, he worked for Mattson Steel as a carpenter. In 1969 he married the love of his life, Agnes "Aggie" Irlbeck. Bob and Aggie purchased the Credit Bureau in Redwood Falls in 1984 where they worked together until retiring in 2005. After retiring they enjoyed their winters in Bullhead City, AZ. During their stay each year they made great friends and memories to last a lifetime. Bob and his wife were both members of the St. Catherine’s Catholic Church and the Foresters. He was also an active member of the VFW and American Legion. Bob had many hobbies which all consisted of being outdoors. In his spare time, you would find him at his farm place cutting wood, mowing, gardening and hunting in his deer stand. He also enjoyed pheasant, goose and grouse hunting with his son, Joel Knapp. He is survived by his son, Joel Knapp of Redwood Falls; Granddaughter, Brenna (Adam) Grund of Granite Falls; Grandson, Jaden Knapp of Redwood Falls and four great grandchildren; Karter Horman, Liam, Lane and Lennox Grund. He is proceeded in death by his wife, Agnes Knapp; his parents, Magnus and Cora Knapp; and his brother, Donald Knapp. Blessed be his memory.

The family of Robert "Bob" A. Knapp created this Life Tributes page to make it easy to share your memories.

Send flowers to the Knapp family.