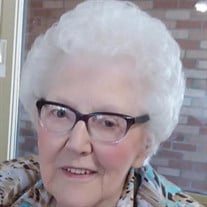 Rita C. Steffensmeier, age 97, of Morgan, passed away on Monday, September 14, 2020 at Gil-Mor Manor Nursing Home in Morgan, Minnesota. Mass of Christian Burial will be held at 11 a.m. Thursday, September 17, 2020 from St. Michael’s Catholic Church in Morgan, with burial to follow in St. Michael’s Catholic Cemetery in Morgan. Visitation will be held on Thursday, September 17, 2020, from 10 until 11 a.m. at the church. Arrangements are with Nelson-Hillestad Funeral and Cremation Service of Redwood Falls. E-mail condolences may be sent via www.nelson-hillestad.com. Rita was born on July 5, 1923, in Lake Henry, MN, to Frank and Catherine (Weber) Braunger. She grew up in Lake Henry and went to school there until the family moved to Morgan in 1934 after her father’s death. On October 23, 1945, she married Ambrose Steffensmeier at St. Michael’s Church in Morgan. They moved to Wanda where they farmed for two years, then moved back to Morgan and farmed for 41 years. After Ambrose passed away in 1990, Rita continued to live in Morgan until moving to Gil-Mor Manor in 2011. Rita was a member of St. Michael’s Church and St. Anne’s Altar Society, Senior Citizens’ Club and was a lifetime member of the VFW Ladies’ Auxiliary. She loved to do gardening, volunteered at Gilmor Manor, delivered Meals on Wheels, enjoyed visiting with her family and friends and playing cards. Rita is survived by eight children: Larry of Boone, IA; Russ (Jan) of Morgan; Chuck of Redwood Falls; Roger (Deb) of White Bear Lake; Kevin of Morgan; Al of St. Paul; Lisa (Dan) Schwab of Mantorville; and Mike (Stef) of New Ulm. She had 12 grandchildren and 14 great grandchildren and is also survived by a brother Francis Braunger of St. Peter, sister-in-law Delores Braunger of Faribault and brother-in-law Dick O’Callaghan of Wanda. Rita was preceded in death by her husband, Ambrose, and sisters Sr. Mary Vivian, Sylvia Iffert, Anna Walter, Rose Senger, Florence Kerkhoff, Dorothy O’Callaghan and brothers Eugene and Linus Braunger. Blessed be her memory.

The family of Rita C. Steffensmeier created this Life Tributes page to make it easy to share your memories.

Rita C. Steffensmeier, age 97, of Morgan, passed away on Monday,...

Send flowers to the Steffensmeier family.