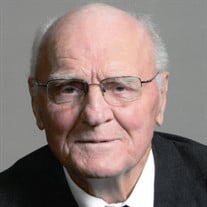 Richard C. Schouvieller, age 86, of Morgan, passed away on Tuesday, April 14, 2020, at Gil-Mor Manor in Morgan, Minnesota. A Memorial Mass Service will be held later this summer. Arrangements are with Nelson-Hillestad Funeral and Cremation Service of Morgan. E-mail condolences may be sent via www.nelson-hillestad.com. Richard Charles Schouvieller, the son of Michael and Mayme (Marie Esplan) Schouvieller was born on February 12, 1934, in Sherman Township of Redwood County, Minnesota. He attended Country School and St. Michael’s Catholic School in Morgan. Richard joined the US Army in 1954 and served until 1956. After serving his country, he returned to the family farm, to raise livestock and crops. Richard was an active member of St. Michael’s Catholic Church. He also was a member of the Knights of Columbus and Catholic Aid. He was a lifetime member of the VFW, a member of the Redwood Area Cattleman’s Assn and the Redwood County Pork Producers. On June 3, 1989, Richard married Phyllis Jemmings Lux at the Chapel at St. Mathias Church in Wanda, Minnesota. Together they farmed until Richard's retirement in August of 2003. After retirement, they spent winters in Arizona and he continued to help on the farm and found joy in vegetable gardening until the fall of 2018 when he was no longer able. Richard is survived by his loving wife of 30 years, Phyllis and his step-children: Michael (Barb) Lux of Sleepy Eye, Diane (LeRoy) Radtke of Mountain Lake, Dennis (Kathy Jo) Lux of New Ulm, MaryKay (Randy) Distad of Farmington, Jim (Rhonda) Lux of Morgan, John Lux of Morgan, Barb (Keith) Kerkhoff of Morgan and Becky (Craig) Hoffbeck of Nisswa. Also surviving are 19 grandchildren and 13 great-grandchildren. Richard is also survived by a brother, Joe Schouvieller of Morgan, a brother in law, Don Entinger of Belle Plaine, a sister in law Joyce Nelson of Grand Rapids and many nieces and nephews. He was preceded in death by his parents, Michael and Marie Schouvieller; brothers, Clarence Schouvieller and Marcus Schouvieller. Sisters, Marion Young, Darlene Hanson, Bernice Entinger and a brother in law, Earl Nelson. Blessed be his memory.

Richard C. Schouvieller, age 86, of Morgan, passed away on Tuesday, April 14, 2020, at Gil-Mor Manor in Morgan, Minnesota. A Memorial Mass Service will be held later this summer. Arrangements are with Nelson-Hillestad Funeral and Cremation... View Obituary & Service Information

The family of Richard C. Schouvieller created this Life Tributes page to make it easy to share your memories.

Richard C. Schouvieller, age 86, of Morgan, passed away on Tuesday,...

Customized sympathy cards. Mailed for you.