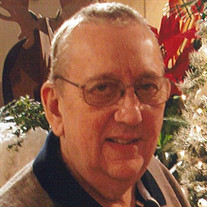 Richard R. “Dick” Quast, 73, of Morgan died Monday, October 8, 2012 at Seasons in Redwood Falls. Memorial services will be held at 10:30 a.m. on Saturday, October 13, 2012 from St. John Lutheran Church in Morgan with burial to follow in the church cemetery. Visitation will be held on Friday, October 12, 2012 from 4 until 7 p.m., and will continue on Saturday, from 9:30 until 10:30 a.m., all at the St. John Lutheran Church in Morgan. Arrangements are with the Nelson-Martin Funeral Service of Morgan. E-mail condolences may be sent via www.nelsonmartinfuneralservice.com. Richard Rolf Quast, the son of Edwin and Ruth (Proehl) Quast, was born March 24, 1939 in Parkers Prairie. He grew up in Alexandria, moving with his family to Long Prairie in 1955. Dick graduated from Long Prairie High School in 1957, then attended Moorhead State College where he earned his Bachelor of Arts degree in education. On August 27, 1961, Dick married Linda McNair in Fargo, North Dakota and the couple made their home in Gwinner, North Dakota. Dick’s first teaching job was in Gwinner where he taught math at Sargent Central High School. He also coached football, basketball and baseball as well as leading the summer recreation program. In the fall of 1965, the family relocated to Morgan where Dick continued to teach for 32 years before retiring in 1997. Following his retirement, Dick started his own computer sales and service business in Morgan. He was very active in the Morgan community throughout his years as a teacher and into his retirement. Dick was a member of the Morgan Fire and Ambulance, served on the city council from 1969 through 1971 and served as mayor of Morgan from 1979 through 1999. He was active in the Lions Club where he received the Helen Keller award and the highest award given to Lions members – the Melvin Jones Award. Dick held every Lions office and was also an active member of the Cedar Mountain Booster Club and worked with the Morgan Spectacular golf tournament. Dick was a member of St. John Lutheran Church in Morgan where he served on the church council and sang in the men’s choir. He is survived by his wife Linda of Morgan; children Jeff (Deb) Quast of Shawnee, Kansas, Blaine (Kyra) Quast of Staples, and Jennifer (Mark) Kuseske of Hutchinson; grandchildren Rachel Engler, Bradley Quast, Aryn Ladd, Kyle Quast, Tristan Kuseske, Emily Ladd, Patrick Kuseske, and Zachary Kuseske; and his sister Karyne Harstad of Minneapolis. Dick was preceded in death by his parents. Blessed be his memory.

The family of Richard "Dick" Rolf Quast created this Life Tributes page to make it easy to share your memories.

Send flowers to the Quast family.