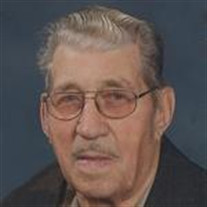 Raymond J. Kerkhoff, 95, of Morgan died Thursday, January 2, 2014 at Gil-Mor Manor in Morgan. Mass of Christian Burial will be held at 11 a.m. on Friday, January 10, 2014 from St. Michael’s Catholic Church in Morgan. Burial, with military honors, will follow in the church cemetery. Visitation will be held Thursday, January 9, 2014, from 4 until 7 p.m., with a combined parish prayer service and rosary at 4 p.m., all at the Nelson-Martin Funeral Home in Morgan. Visitation will continue on Friday at the church for one hour prior to services. Arrangements are with Nelson-Martin Funeral Service of Morgan. E-mail condolences may be sent via www.nelsonmartinfuneralservice.com. Raymond John Kerkhoff, the son of Ben and Theresa (Wimmer) Kerkhoff, was born June 26, 1918 on the family farm in rural Morgan. He was a member of, and received his sacraments at, St. Michael’s Catholic Church in Morgan. Raymond received his formal education at District 99 rural school and St. Michael’s School in Morgan. On September 25, 1940, Raymond married Lorraine M. Hoffmann at St. Michael’s and they made their home in the Morgan area. On April 25, 1944, Raymond was inducted into the United States Army. He served as a mine-detector in the European Theatre during World War II. After Raymond was honorably discharged on December 2, 1945, he returned to farming. On April 1, 1946, the family moved to the farm which they purchased in 1969. Raymond was a volunteer at St. Michaels Parish. He helped with building the church and school, was an usher, an Ecumenical Minister, and a member of the Knights of Columbus where he served as Grand Knight for one term. Raymond was an active member of the V.F.W. and served as commander for one term. He enjoyed working with his hands: with his welding skills Raymond fixed his farm machinery, and with his woodworking skills he remodeled the family home and made furniture. He also enjoyed fishing, traveling, playing cards, dancing, and league bowling – but most of all he enjoyed the special times spent with family. He is survived by his wife Lorraine of Morgan; children Steve (Judy) Kerkhoff of Val Vista, Arizona, Mavis Sonnier of Walnut Creek, California, Ken (Dee) Kerkhoff of Walnut Creek, California, Kathy (Patrick) Wilson of Burnsville, Chuck (Carol) Kerkhoff of Centerville, and MaryLee (Dennis) Dallman of Ironton; and daughter-in-law Patricia (Randy) Scott of Council Bluffs, Iowa. Also surviving are his grandchildren Laurie (Rob) Elliott, Jon Kerkhoff, Peggy Greear, Jason (Dawn) Sonnier, Matthew Kerkhoff, Rachel Kerkhoff, Kelly (Jason) Detloff, Troy (Celeste) Wilson, Aaron (Christina) Kerkhoff, Robyn (Kevin) Chmiel, Nicole Scott, Christopher Kerkhoff, and Calvin Kerkhoff; 17 great-grandchildren; brother Glen (Arlene) Kerkhoff; brother-in-law Philip Wenner; and sisters-in-law Francis Kerkhoff, Mary Ann Kerkhoff, and Bonnie Meillier. Raymond was preceded in death by his son Kevin Kerkhoff; son-in-law Aaron Sonnier; brothers Bernard, Harold, Delbert, and Herbert; and sisters Lucille Eischen, Verna Anderson Mertz, Sally Anderson, Eileen Brown and Delores Wenner. Blessed be his memory.

The family of Raymond John Kerkhoff created this Life Tributes page to make it easy to share your memories.

Send flowers to the Kerkhoff family.