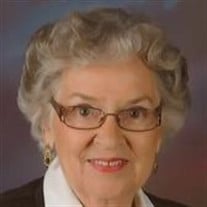 Phyllis Larson, 94, of Redwood Falls died Wednesday, November 4, 2015 at Sunwood Good Samaritan Care Center in Redwood Falls. Memorial Services will be held at 11 a.m. on Saturday, November 21, 2015 from Gloria Dei Lutheran Church. Inurnment will be held at a later date in the Redwood Falls Cemetery. Visitation will be held Friday, November 20, 2015, from 4 until 8 p.m., at Nelson-Hillestad Funeral Home in Redwood Falls and will continue on Saturday at the church from 10 until 11 a.m. The family prefers memorials be directed to Redwood Area Communities Foundation or Friends of the Park, P.O. Box 481, Redwood Falls, MN 56283. Arrangements are with Nelson-Hillestad Funeral Service of Redwood Falls. E-mail condolences may be sent via www.nelson-hillestad.com. A 17th descendent from the Mayflower’s John Howland, Phyllis Land, daughter of Zola (Barrows) and Richard Land, was born in Cumberland, Wisconsin, on October 20, 1921. She was the second oldest of nine children. Phyllis graduated from Roosevelt High School, Minneapolis, in 1939 and then entered beautician school. She later became a telephone operator for Northwestern Bell in Minneapolis. On September 4, 1943, she married Edwin A. (Eddie) Larson in Columbus, Missouri after meeting at a USO dance. Eddie returned from England as a second lieutenant of the United States 8th Air Force in 1945. After four years in Kenyon, Minnesota, they started Larson’s Home Furnishings in Redwood Falls with Eddie’s father, Edwin R. Larson, in 1949. A second furniture store in Marshall was purchased in 1955. Both stores continue today under the management of Phyllis and Eddie’s son, Scott. In addition to raising five children, Phyllis had many interests outside of home. She loved golf and was club champion. She was responsible for planning many of the country club’s social activities in the 1950s and 60s. Phyllis was also a master of the arts. Needlepoint, quilts and hardanger for family and church were favorite hobbies. Trips enjoyed by Phyllis and Eddie inspired many oil paintings of places they visited. Phyllis was the master architect for their home on West Chestnut with a view of the Redwood River, a home the family enjoyed for more than 40 years. Phyllis’ contributions to Gloria Dei Lutheran Church were many, including working on the Bible camp quilts and teaching many women there how to make and roll lefse. A member of the congregation made her a special stool to boost her to a comfortable height in the church kitchen to roll out the Norwegian delicacy. Phyllis was a very active mother, serving as Cub Scout Den Mother for her sons and Girl Scout leader for Terri’s troop. She always welcomed her children’s friends, making the Larson home one of the go-to hang-outs for gatherings. Phyllis enjoyed life whether it was gardening, organizing cookouts in the park, or sewing clothes and Halloween costumes for her children and grandchildren. She took numerous trips to Japan to spend time with her youngest son, Eric and his family, and to Norway Lake for long weekends. She even was bold enough to take Harley rides with her oldest son, Chris. In her last years, Phyllis enjoyed many activities at Garnette Gardens and the twice daily assistance and companionship of her son, Tom. Phyllis was hospitalized for thrombosis in July 2015. Upon her return to Redwood Falls she was admitted to the Sunwood Good Samaritan Care Center where she died on November 4, 2015. She is survived by her sister-in-law, Sandi Land of Blaine; her brother-in-law Jerry Hern of Mesquite, Texas; sons Chris (Karen) of Maple Grove, Scott (Robin Stegner), and Tom all of Redwood Falls, Eric (Itsue Ito) of Miyazaki, Japan; daughter Terri (Joel) Simon of Bloomington; five grandchildren; three great-grandchildren, and three great-great-grandchildren. She was preceded in death by her loving husband Eddie in 1996, and her eight siblings. Phyllis was a multi-faceted and talented woman, a gracious hostess and loving mother. She was a role model for her family as well as many younger women in the community. We can all learn from Phyllis’ philosophy: Learn to accept gracefully what God has given you and then make the best of it.

The family of Phyllis Land Larson created this Life Tributes page to make it easy to share your memories.

Send flowers to the Larson family.