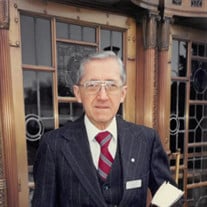 Pastor LeRoy Lothert, 92, of New Ulm, formerly of Morton, passed away at the Franklin Rehabilitation and Health Care Center on Monday, November 16, 2020. A Private Family Funeral Service will be held at Zion Lutheran Church of Morton, with burial at the Morton City Cemetery. In recognition of the ongoing pandemic and risks of spreading the virus at large gatherings, as an alternate to attending the funeral in person, a video of the service will be posted and available for viewing on the www.nelson-hillestad.com web-site beginning Sunday (11/21). Please also share your memories and wishes via www.nelson-hillestad.com website. LeRoy Harry Lothert, the oldest of eight children of Harry E. and Geneva M. (Larson) Lothert, was born on May 7, 1928, 7 miles north of Morton, Minnesota. On May 27, 1928 he was made a child of God by Holy Baptism at Zion Ev. Lutheran Church, Morton. He grew up north of Morton attending rural schools, District 12 for grades one and two and District 101 for grades three through eighth. On March 29, 1942, he was confirmed at Zion by Rev. M. J. Wehausen. That fall, he began ninth grade at Dr. Martin Luther High School in New Ulm, from which he graduated on June 7, 1946. He continued his studies for ministry at Northwestern College, Watertown, WI graduating June 7, 1951 and Wisconsin Lutheran Seminary, Mequon, WI graduating on June 3, 1954. LeRoy began his ministry by serving as a tutor for two years in Michigan Lutheran Seminary High School, Saginaw, MI. In 1956 he was assigned as pastor at Christ Ev. Lutheran Church, Shields, rural Saginaw, where he was ordained and installed on July 8, 1956 by Prof. Conrad Frey. While there he also taught part time the upper grades in the Christian Day School from 1957 to the time of his accepting a call to Mount Olive, in Shakopee, where he was installed on October15, 1961. He also served at Good Shepherd in Burnsville, for two years when they began on May 12, 1963; Faith Lutheran in Prior Lake, when they began on June 9, 1968 and became a dual parish with Mount Olive in Shakopee. On July 1, 1973, he left for Columbia, MO where he started a mission (Grace) that summer. He also served an established church, Peace in Owensville, MO, 90 miles southwest of Columbia, and served our Wisconsin Synod military at Ft Leonard Wood, MO. On January 1, 1977 he came back to Minnesota to serve Zion in Brighton Twp. of rural New Ulm and Courtland Lutheran of Courtland, Minnesota. In October of 1990 he accepted a call by LIMA to serve as chaplain for our Synod at the hospitals in Rochester. While there he was asked to serve a mission group, Our Savior in Kasson, MN, when they began on January 4, 1992. He served them until their church was built. He preached his farewell on November 28, 1998, when he retired from his ministry at Kasson and the chaplaincy at Rochester and moved back to Morton. In retirement he continued to serve as a vacancy pastor to St. John's in Sheridan Twp., rural Belview, from March 2006, until they closed on August 27, 2006. Also, St Paul's of Seaforth, from March 2006, until they closed on August 9, 2009. He was Financial Secretary of the Mankato Conference from 1962 to 1970 and the Minnesota District from 1967 to 1970. In 1968 he served on the committee that oversaw the publishing of the Golden Jubilee History Book for the 50th Anniversary of the WELS Minnesota District. In 1993 he was chairman of the committee that oversaw the making of a video, "One in Christ," for the 75th Anniversary of the Minnesota District. He was president of the Minnesota Prairie OWLS Chapter 17 from 2000 through 2013. In 2018, he was a member on the committee that made plans for observing the 100th anniversary of the Minnesota District by publishing a booklet entitled “Continuing in My Word”. LeRoy passed away on Monday, November 16, 2020 at the age of 92 at the Franklin Rehabilitation and Health Care Center of Franklin, Minnesota. He is survived by one brother, Gene of Delhi; and one sister, Genevieve (Theodor) Nommensen of West Bend, WI: sisters-in-laws, LaVonne of Hector and Betty of Willmar; many nephews and nieces, and their many offspring. He was preceded in death by his parents; brothers, Floyd, Richard, Harry Jr, Marlow, and Reinhold; nieces, Rebecca and Stacy; nephews, Jay and Stanley; and sister in laws Darlyne, Darlene, Ardell and Della. To God be the glory. LeRoy requested no flowers, please. Memorials are preferred may be given to the Timothy Endowment Fund at Martin Luther College, New Ulm; or the Aaron Endowment Fund at the Wisconsin Lutheran Seminary, Mequon, WI, or to the Minnesota Valley Lutheran High School Foundation, New Ulm, or to the donor's choice.

Pastor LeRoy Lothert, 92, of New Ulm, formerly of Morton, passed away at the Franklin Rehabilitation and Health Care Center on Monday, November 16, 2020. A Private Family Funeral Service will be held at Zion Lutheran Church of Morton, with burial... View Obituary & Service Information

The family of Pastor LeRoy H Lothert created this Life Tributes page to make it easy to share your memories.

Send flowers to the Lothert family.