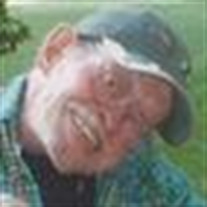 Palmer Nelson, 78, of Redwood Falls died Monday, December 22, 2014 at his home. Funeral services will be held at 10:30 a.m. on Monday, December 29, 2014 from St. Matthew’s Lutheran Church, Evan, with burial to follow in Dannebod Brookville Cemetery. Visitation will be held Sunday, December 28, 2014, from 4 until 7 p.m., at Nelson-Martin Funeral Home in Redwood Falls and will continue at the church on Monday for one hour prior to services. Arrangements are with Nelson-Martin Funeral Service of Redwood Falls. E-mail condolences may be sent via www.nelsonmartinfuneralservice.com. Palmer Nels Nelson, the son of Henry and Bernice (Madsen) Nelson, was born March 21, 1936 at home in Brookville Township, Redwood County. He grew up on the family farm and attended special education classes in New Ulm and Redwood Falls. Palmer was baptized at Brookville Lutheran Church and confirmed at Resurrection Lutheran Church in Redwood Falls. Palmer became a resident of the Robert Milton Home in Redwood Falls in the late 1960s where he lived until the residents moved into four-person homes with REM-South Central Services in the late 1980s. Palmer was involved in SEI activities for over 40 years and was very proud of his certificate! He was a member of St. Matthew’s Lutheran Church in Evan. Palmer had a gift of music and played the drums, piano, organ, accordion and keyboard. He also enjoyed building model airplanes, riding his bike, fishing, and – in his younger years – playing ball. He looked forward to church and family activities and loved to play cards and pool with his nephews. Palmer is survived by his sister Lois Tiffany of Morgan; and nieces Lynette (Keith) Krenz of Sleepy Eye, Sandy Ayres of Worthington, Jan (Ken) Krenz of Morgan, Barb Christensen (fiancé Scott Nelson) of Redwood Falls, and Patti (Rick) Krenz of Sleepy Eye. He was preceded in death by his parents, a sister in infancy, and his brothers-in-law George Peterson and Bill Tiffany. Blessed be his memory.

The family of Palmer Nels Nelson created this Life Tributes page to make it easy to share your memories.