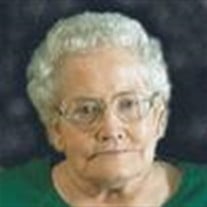 Opal Malecek, 82, of Morgan died Sunday, April 13, 2014 at Gil-Mor Manor in Morgan. Mass of Christian Burial will be held at 10:30 a.m. on Wednesday, April 16, 2014 from St. Michael’s Catholic Church in Morgan with burial to follow in the church cemetery. Visitation will be held at the church on Wednesday from 9 until 10:30 a.m. Arrangements are with Nelson-Martin Funeral Service of Morgan. E-mail condolences may be sent via www.nelsonmartinfuneralservice.com. Opal Ann Malecek, the daughter of Herman and Cecilia (Kerkhoff) Scharfencamp, was born September 19, 1931 in the family home in Sherman Township, Redwood County. She grew up on the family farm and received her elementary education at St. Michael’s Catholic School. Opal attended Morgan High School and graduated there in 1949. On April 28, 1951, Opal married Jerome “Jerry” Malecek at Camp Rucker, Alabama. Following Jerry’s discharge from the service, the couple returned to Redwood County and began farming south of Morgan. In 1969, the family moved into Morgan where Jerry and Opal were involved in the bulk fuel business until their retirement. Opal was a member of St. Michael’s Catholic Church and the Council of Catholic Women. She was a homemaker but, first and foremost, a wife and mother. Opal loved flowers, picnics in Ramsey Park, and spending time with her husband, children, grandchildren, and great-grandchildren. In their retirement, Opal and Jerry enjoyed traveling throughout the United States and in several foreign countries. In 2010, Opal became a resident of Gil-Mor Manor where she was lovingly cared for until her death on Palm Sunday. She is survived by her husband Jerome “Jerry” Malecek of Morgan; children Steven (Roxane) Malecek of Plano, Texas, Susan (Michael) Haubrich of Danube, Maxine (John) Olson of Willmar, and Mark (Roxy) Malecek of Redwood Falls; grandchildren Amy Smith, Angela Hoppe, Matthew Haubrich, Alyssa Toft, Julie Malecek, Amanda Frank, Gregory Haubrich, Daniel Haubrich, Rachel Malecek, Abby Gronli, and Ahnna Malecek; nine great-grandchildren, and one on the way; and sisters Ruth Green Simonsen of Redwood Falls and Fern Paschke of Brownsdale. Opal was preceded in death by her parents, Herman and Cecilia; and brothers Paul, Ralph, Lyle, and Dale Scharfencamp. Blessed be her memory.

The family of Opal Ann Malecek created this Life Tributes page to make it easy to share your memories.

Send flowers to the Malecek family.