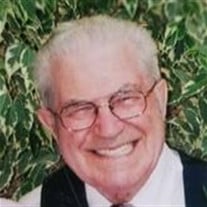 Norman Rudenick, 96, of Redwood Falls died Wednesday, November 22, 2017 at Sunwood Good Samaritan Care Center in Redwood Falls. Mass of Christian Burial will be held at 11 a.m. on Wednesday, November 29, 2017 from St. Catherine’s Catholic Church in Redwood Falls. Burial, with full military honors, will follow in the church cemetery. Visitation will be held Tuesday, November 28, 2017, from 4 until 7 p.m., with a prayer service at 7 p.m., all at Nelson-Hillestad Funeral Home in Redwood Falls. Visitation will continue on Wednesday, from 10 until 11 a.m., at the church. Arrangements are with Nelson-Hillestad Funeral and Cremation Service of Redwood Falls. E-mail condolences may be sent via www.nelson-hillestad.com. Norman Charles Rudenick, the son of Carl and Wilhemena “Minnie” (Dommer), was born March 17, 1921 on the family farm in Vail Township, Redwood County. He grew up on farms in Vail, Waterbury and Sherman townships and received his formal education in country school. Norman was inducted into the United States Army on September 4, 1942 from Fort Snelling, Minnesota. He served as a squad leader with the 35th Infantry Division, 137 Infantry Regiment, C Company of the 1st Battalion in Normandy, Rhineland, Northern France and Central Europe. On November 23, 1944, Thanksgiving Day, Norman and his company were captured and held as a Prisoners of War. Norman was a prisoner of war until May 8, 1945, when the war ended. He was honorably discharged with the Rank of Technical Sergeant on October 5, 1945 from Fort Sam Houston, Texas. On July 16, 1945, Norman married Elaine Hammerschmidt in St. Anne’s Catholic Church, Wabasso. The couple made their home in Wabasso and later Redwood Falls. Norman was employed by the State of Minnesota Department of Transportation as a highway maintenance man for 36 years. He retired in 1986. Norman is survived by his wife Elaine of Redwood Falls; children Harland (Judy) Rudenick of Blaine, Delbert (Rebecca) Rudenick of Rosepine, Louisiana, Joane (Linus) Madsen of Redwood Falls, Kevin (Michele) Rudenick of Redwood Falls, Norma (Bernie) Balderston of Olivia, Susan (Tom) Smith of Bird Island, and Joseph (Jeni) Rudenick of Wabasso; 16 grandchildren; 18 great-grandchildren; one great-great-grandchild; and his sister Shirley (Roland) Froehlich of Murdock. He was preceded in death by one son, three brothers, and three sisters. Blessed be his memory.

The family of Norman Rudenick created this Life Tributes page to make it easy to share your memories.

Send flowers to the Rudenick family.