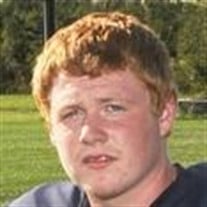 Nathan Kleinschmidt, 17, of Morgan died Saturday, April 30, 2016 in Renville County. Funeral services will be held at 10:30 a.m. on Friday, May 6, 2016 from Zion Evangelical Lutheran Church in Morgan with burial in Zion Evangelical Lutheran Cemetery, rural Morgan. Visitation will be held Thursday, May 5, 2016, from 5 until 9 p.m., at the Cedar Mountain High School gymnasium in Morgan. Visitation will continue on Friday, from 9:30 until 10:30 a.m., at the church. Arrangements are with Nelson-Hillestad Funeral and Cremation Service of Morgan. E-mail condolences may be sent via www.nelson-hillestad.com. Nathan Lee Kleinschmidt, the son of Corey Kleinschmidt and Beth Oslund, was born February 1, 1999 in Redwood Falls. He grew up in Morgan and was a junior at Cedar Mountain High School at the time of his death. He was baptized at Zion Evangelical Lutheran Church and confirmed at St. John Lutheran Church in Morgan. Nate was a full-time brother and best friend! He was a family man and always willing to babysit his siblings and even watch his brothers’ dogs. “Number 84” loved being with his teammates and playing football. Nate enjoyed golfing, fishing, hunting, and spending time with his siblings and friends. Nate was known for his caring personality, hugs, red curly hair and his one-of-a-kind laugh. He was loved by many and his spirit will live through all the people he touched. Nate is survived by his father Corey Kleinschmidt of Morgan; mother Beth Oslund of Morgan; his grandparents Jac and Linda Kleinschmidt of Morgan, Kathi Beckler and special friend Bob “Tubby” of Cobden, Glen Landgraff of Franklin, and Keith and Dawn Oslund of Blomkest; brothers Dalton Kleinschmidt (and Cara Doyen) and Shawn Kleinschmidt (and Stephanie Hernandez) both of Morgan; sisters Lauryn Menk, Aubrey Ruhr, Abby Ruhr, and Reagyn Kleinschmidt all of Morgan; special friend Cadence Polkow; and many aunts, uncles, cousins and friends. He was preceded in death by his great-grandparents. Blessed be his memory.

The family of Nathan Kleinschmidt created this Life Tributes page to make it easy to share your memories.

Send flowers to the Kleinschmidt family.